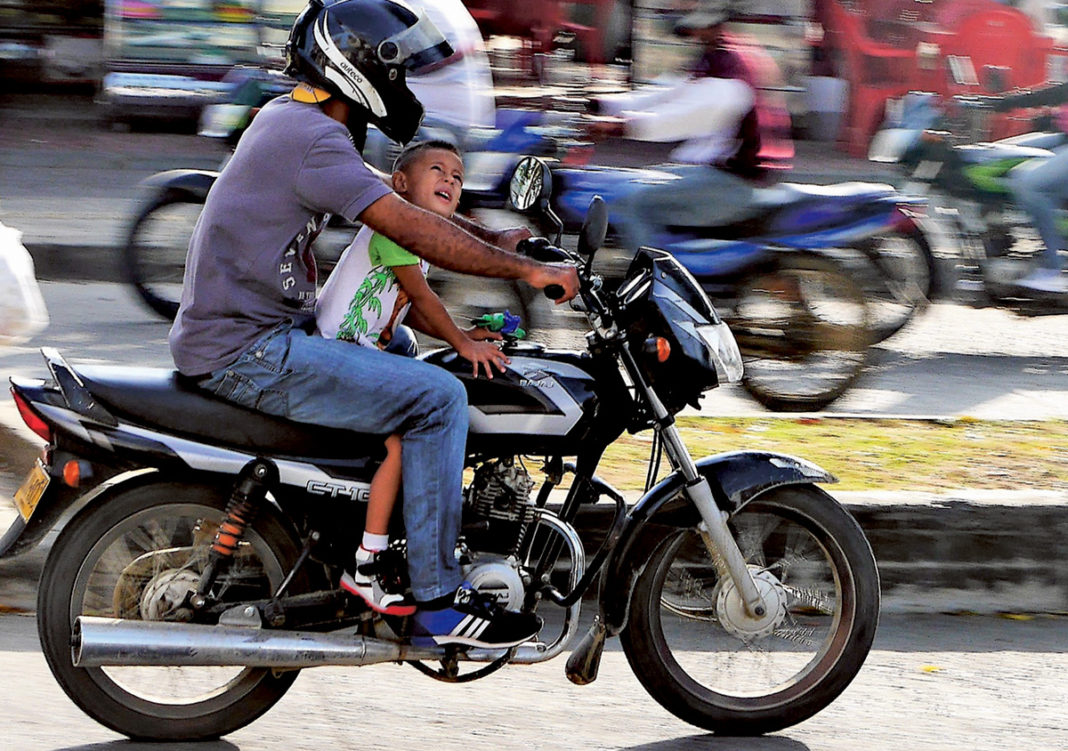 I was trying to give away a child’s car seat the other day but the intended recipient – a friend and mother of a two-year-old girl – was not having it.

“I don’t think we’ll use it. She will probably cry if we strap her in. She is used to being free in the car,” rang some self-assured words. “But she will get used to it after a few days. All kids do,” I say, to no avail. So, no car seat for Chiquita. She will grow up like most Colombians, desensitised to road safety from an early age.

This is ironic because other aspects of her life are wrapped in cotton wool. If Chiquita has even the slightest sniffle her parents rush her to the hospital for extensive tests. And ironically, Chiquita’s mother was herself maimed in a vehicle crash in her youth. And doubly ironic is that Chiquita’s mother is a professional adviser in work-place risk reduction. The point is that she just does not see the danger of a small child loose in a big car. And if she doesn’t get it, who will? (Sorry to pick on you, Mrs Chiqui, but the car seat is still here if you change your mind).

This lack of vision explains why the country registers around 6,000 road deaths a year – one every 90 minutes – and 40,000 serious injuries. Traffic accidents are the largest cause of mortality in young people, and have killed more Colombians than 52 years of internal conflict.

The figures are alarming and if you spend time in Colombia you do not need statistics to spell out the dangers. Out on the streets I started to keep a mental log of accidents encountered. In Bogotá over a month, on every journey, I saw a recent crash (usually a motorbike) and several times I witnessed the actual moment of impact.

Once, very close to home, 20 meters from my flat, I heard a screech of tires and sound of crushed metal, a motorbike helmet landing empty at my feet. I looked up to see the rider lying still and unresponsive on the road, her distraught passenger (whose helmet had stayed on) crouched over her repeating “Mamá, how many times have I told you to fasten the strap on your helmet?”

But at least they had helmets, even if half undone.

Visiting the coast recently where motos reign supreme, I was astounded how things are going backwards regarding safety. Ten years ago when I lived there, police would at least make a token effort to enforce helmet-wearing. But not anymore. In Monteriía, the bustling capital of Córdoba, mototaxis are the main form of public transport, with families of five, all helmetless crammed on motorbikes weaving crazily through traffic, while police, standing just steps away, are glued to their smartphones.

Not surprisingly, motorbikers make up 60% of all accident victims and by far the most deaths. And the statistics just keep rising. In 2016, transit authorities disclosed that nine people die every day in motorbike accidents, a staggering average of 3,200 compared to 290 in cars and 340 knocked off bicycles.

The sheer numbers of motorbikes navigating public space also makes the sidewalks of Bogotá a live game of Space Invaders. And increasingly motorbike riders, perhaps inspired by the old adage “keep death off the roads, drive on the pavement,” are doing just that. I first saw this phenomenon in towns on the Pacific Coast where bikers fed up with traffic queues would roar down the pavement scattering pedestrians.

Then, last week I saw it for the first time on the Caribbean Coast, mostly as a result of new road designs that create long lanes divided by concrete barriers. The riders cannot be bothered to drive along and find a retorno, so instead just cruise down the pavement against the traffic flow to save time. The police, of course, do nothing, and I got so angry trying to shepherd various small children along these dangerous footpaths I was ready to find an iron bar to whack in the spokes of the next moto transgressor.

I am not the only person in Colombia to feel this. The Ministry of Health has long recognised traffic as a major health risk and compiles an annual ‘epidemiological’ analysis. The last one in 2015 gives some handy insights on what to avoid, mainly suggesting not to ride motorbike between the ages of 20 and 24.

Unfortunately these figures only show the gross number of accidents and not the number of mishaps ‘per journeys made’. But we can maybe assume that there are more motor- bike journeys than car trips (there are about 6 million motorbike registered in Colombia and 4 million cars and pick-ups). Common sense dictates that you are more vulnerable on a motorbike than in a car. The sheer number of people on foot and their vulnerability to hard objects contributes to the high pedestrian toll.

According to insurance data, two thirds of road deaths are caused by ‘multiple injuries’ and a third specifically by skull or thorax trauma. The accidents are caused mainly by speeding, ignoring road signs and traffic lights, and the road conditions themselves (swerving to avoid puddles and potholes) also play a large part. The same source suggests ‘distractions’ are a common trigger for accidents, and rather unfairly states the first one as ‘putting on makeup’ (I say ‘unfairly’ because men are four times more likely to crash than women).

Of course using your smartphone is high on the list of distractions, and I was amazed to see a recent new trend among Bogotá taxi drivers who watch TV novelas on dashboard-mounted tablets, as if they don’t have enough on their plate just talking and texting while driving around the capital.

Weekend traffic can be a killer with 21% of road deaths on Saturdays or Sundays compared to 13% on an average weekday. This might be from factors such as drunk driving, low staff levels in hospitals (or both). As expected, in actual numbers the most road deaths are in urban areas with Cali, Medellín and Bogotá leading the way. But in terms of deaths per number of people living in an area, an unexpected pattern emerges. By this measure the Llanos departments of Casanare, Arauca and Meta have the most dangerous roads, along with Cesar and Huila. This is down to large numbers of motos in the towns, but also I suspect it is because they have long stretches of fast straight road where people hurtle along and any mistake is devastating. In contrast, in Bogotá the number of fatal accidents per population is below average, partly because more people take public transport, but also because traffic rarely reaches high speeds.

One root cause is that people do not actually learn to drive, as I discovered when I went to get my Colombian driving licence. The driving school had no intention of providing lessons but instead asked me to sign fabricated ‘class attendance’ records that would then be presented to the dreaded Transito. “But I want a lesson,” I told the person at the school. “Don’t be silly, you already know how to drive,” he told me, on the basis that I had gone once around the block. I checked with friends and colleagues. Not one had actually had lessons to obtain their licence. Even the National Police chief recently admitted that “not a single person in Colombia has ever failed their driving test.”

Driving schools could at least promote safe driving and explain the benefit of seatbelts, which in countries where enforced, reduce serious crash injuries and deaths by an estimated 50%. Infant seats reduce the risk to babies by 70%. But in Colombia infant car seats are rarely used. Seat belts often are fitted but from my observations, people find every opportunity not to use them. Traveling with my Colombian in-laws, they click on their seatbelts at an approaching police check, but unclick them as soon as “danger” has passed.

So what to do. The Colombian government, perhaps feeling the heat from global entities such as the United Nations, World Bank and WHO, last year declared traffic accidents a public health emergency and set up a National Road Safety Agency tasked with reducing road accidents by 25% over 5 years.

Some change is on the way with a new national Police Code. Drink driving campaigns are bearing fruit. Speed and radar camera traps are showing results in selected zones, but usually on new roads where it is already safer to drive. New laws are being passed that mean new cars have to be fitted with airbags, headrests (to reduce whiplash injuries) and anti-lock braking. But will this be enforced? Take the recent confusion over rear seat belts, which have been obligatory to be fitted in cars since 2004, but it was never clear if the law required them to be used. In fact the Ministry of Transport went out if its way in early 2015 to assure Colombians that they ‘would not be imposing fines’ for failure to use backseat belts. Then later in the year it announced that no, you do need to use them. Talk about mixed messages.

So, what about motorbikes? One reason for the rise in motos circulating in Colombia– from one million to six million in 15 years – is lack of public transport with in many areas, the motos themselves filling the gap. In rural areas mototaxismo is an essential service to reach remote villages. But in large crowded cities it is illegal, so exists unchecked (and largely unregulated) often backed by criminal groups leaving authorities powerless to stop it. Cities like Cali count on an estimated 4,000 illegal mototaxis. Nationwide an estimated 10% of all public transport trips are done on the back of motorbike. It is slowly spreading to Bogotá, and Uber wants in.

Not everyone is against it; proponents argue mototaxismo is cheap and door-to-door, fills the public transport gap, and economically supports large numbers of people otherwise out of work. Thus, it is a social as well as transport issue. In Pasto, in the southern department of Nariño, an estimated 6,500 people derive their livelihoods from illegal transport. But it is also the reason many public bus systems in cities like Montería fail, everyone just jumps on a rapi, which is half the price of the bus. And then there’s the long-term social impact of road accidents with 150,000 Colombians currently crippled for life by vehicle injuries, and an estimated annual health cost of 23,000 million pesos – US$80 million – for survivors of motorbike crashes.

In a perfect world we all drive carefully, stop watching dashboard TV, put on seatbelts, wear crash helmets, or sell the moto and take the bus because we want to stay safe. Behind that is education and habits, as much as laws and enforcement – although it would help if the police stopped driving their own motorbikes through red lights.

Deep down, the issue is how we personally measure risk. My Colombian friends are often amazed when I take some rural backroad through a supposed conflict zone and emerge alive. I am constantly moaning at their lack of seatbelts, failure to use child seats and habit of cramming twelve relatives and a dog in the rear seat. Not to mention the non-stop vallenato music.

But if official figures show that crashes kill more people than the conflict we have endured, then it is time for change. Come on Colombia, belt up! 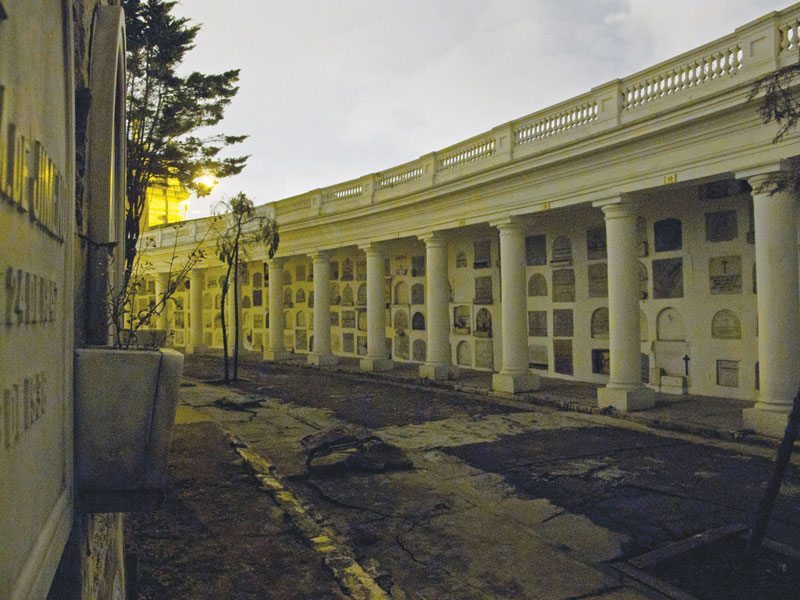 Of paupers and presidents