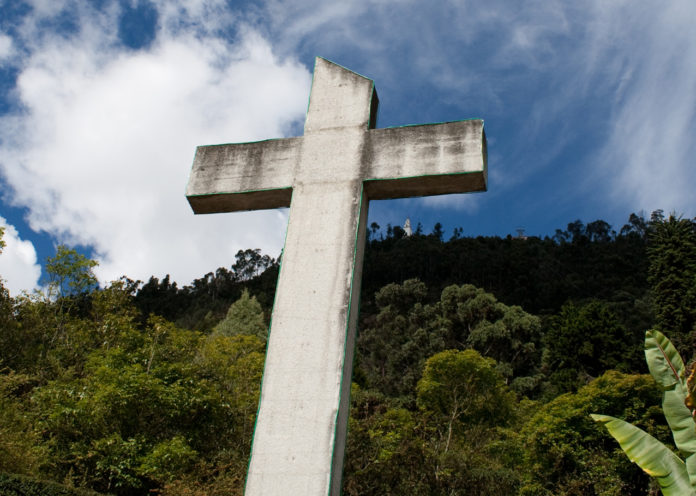 Holy Week officially began Palm Sunday, March 25, and ends Easter Sunday, April 1. As a predominately Catholic country, Semana Santa is the most important religious celebration in Colombia, and during the week, the faithful observe traditions which were handed-down from Spain.

As Holy Thursday and Good Friday are national holidays in Colombia, many decide to leave the big city for the countryside, and take full advantage of the Easter vacation in towns where there is an historical connection to Catholic rituals, such as Popayán in the department of Cauca, Mompox in Bolívar, and Pamplona, Norte de Santander. These three destinations exemplify the solemnity of Semana Santa, but are difficult to reach on a three-day escape from Bogotá. So, we’ve lined up some ways one can celebrate Holy Week in the capital.

Bogotá has its share of cloaked Nazarenes and Romans. In keeping with a hundred-year old tradition, the barrio Egipto, overlooking La Candelaria, has its Good Friday procession. Every year, the community elects a Jesus who must carry a wooden cross through the cobble streets. The procession starts early (around 8 am) and visitors to La Candelaria may feel they have stepped back in time as this barrio puts on a very realistic reenactment of Christ’s final hours.

A longstanding tradition is also to visit seven churches during the week, especially on the eve of Holy Thursday. This pilgrimage symbolizes the journey Jesus made from his prison to the crucifixion. The faithful say a prayer in every church. The most recommended are Catedral Primada, Iglesia de la Veracruz, Iglesia de San Francisco, Iglesia de La Candelaria, and Iglesia de las Aguas. All these churches are located within La Candelaria and are free to the public. The city’s Institute of Tourism (IDT) will also offer guided tours of the museums in the historic center, Monday to Sunday, including the 16th century churches of San Agustín, San Ignacío and Santa Clara.

One of the most important pilgrimage sites in the city is the church on top of Monserrate dedicated to El Señor Caido (the Fallen Lord), and during Semana Santa, thousands of worshippers ascend the steep mountain on foot. Many people, particularly the most pious choose to crawl up the hill as they believe their prayers will be answered by this act of selfless devotion.

If you decide to forgo the fast way of riding the cable car and attempt the summit, be prepared for a busy 4-kilometer path. On Good Friday, a priest guides the congregation following the Stations of the Cross, accompanied by 200 police officers. This pilgrimage also starts early and can be combined with the procession in nearby barrio Egipto.

If you are planning on heading out on a day trip, then the Salt Cathedral in Zipaquirá, 40 kilometers northeast of Bogotá, is a much visited tourist attraction that also hosts a Stations of the Cross pilgrimage.

Morning and afternoon masses are held across Bogotá on Easter Sunday, and one of the most popular, besides heading to the Primatial Cathedral in the Plaza de Bolívar, is the Santuario del Divino Niño (Shrine of the Infant Jesus) in the Barrio 20 de Julio. From dawn onwards, this large public square in the south of the city, gets filled as the parish priests bless miniatures of the iconic Infant Christ figurine, as well as the faithful.

If interested in English church services, the United Church of Bogotá (Cra.4 No. 69-06), a non-denominational, Bible-based church, celebrates Easter on the following days and times: Good Friday at 5:30 pm and Easter Sunday at 8:30 am and 10:45 am. The Parroquia de Las Aguas (Cra.2 No.18A-69) will celebrate a Catholic mass Easter Sunday at 11:00 am. Reverend Mark Ball will officiate an English Anglican service on Easter Sunday at 4:00 pm in the San Pablo church, Calle 51 No.6-19.

According to the mayoralty, in order to offer a safe Easter holiday to locals and visitors, an extra 50,000 police will be deployed to patrol the streets of the capital.