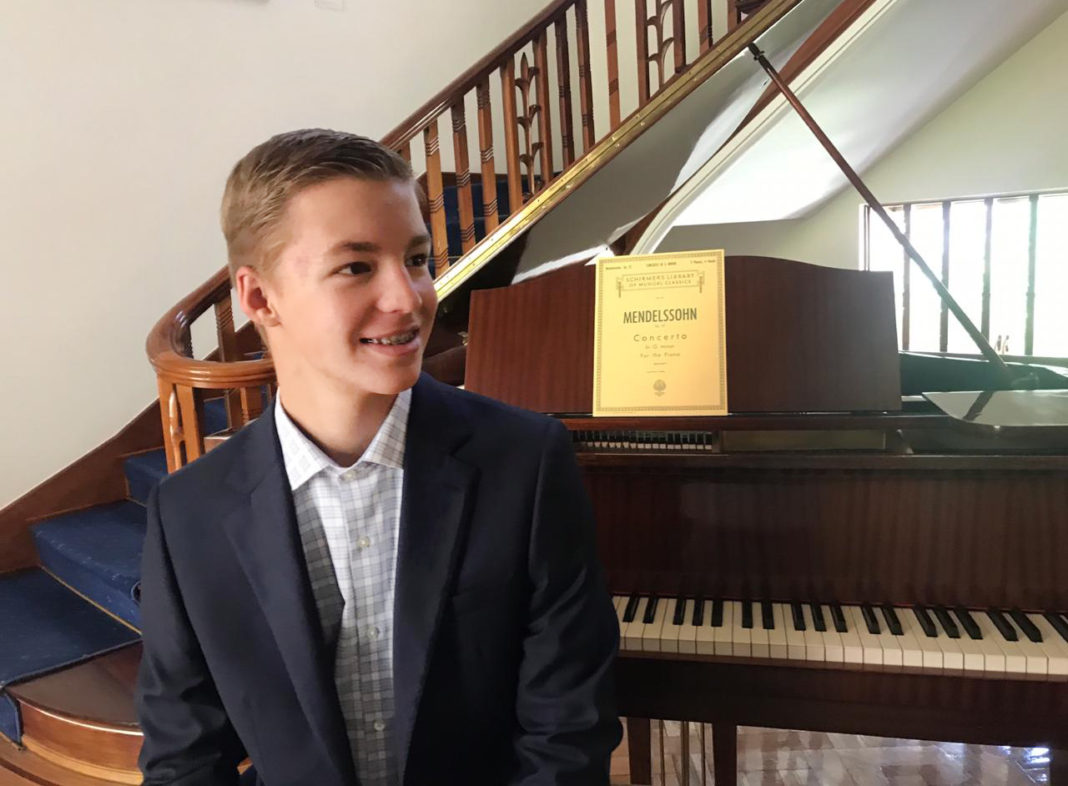 At age 17, American classical pianist and improviser Wiley Skaret is proving one is never too young to use one’s talents to help others. When he was six years old – having played the piano for only one year – he organized his first benefit concert: a 40-minute solo performance that included Bach and an on-stage improvisation. The entrance fee was a can of food that was donated to a food pantry at his local church. This would be the first of many fundraisers for the young musician.

“Music is really great, but if you just do one concert for one night, then it’s over. I’ve always liked to stretch out the benefit a little more, that’s why I love doing benefit concerts,” Wiley explains.

In 2014, he performed his first international solo in Guatemala and raised US$15,000 for a Down Syndrome foundation. Similarly, he has raised hundreds of dollars playing in the Washington area in the United States.

Five years ago his family moved from the U.S to Bogotá. It was here, where Wiley discovered the important role the Colombian National Police play in the fight against drugs. Inspired by their dedication and wanting to help families of police officers, Wiley started his most ambitious project to date. James 1 is a nonprofit organization whose goal is to create a US$500,000 endowed university scholarship fund for the children of Colombian police officers killed in the line of duty. “We’ve raised about US$65,000 so far, and I hope to complete the rest within a year,” says Wiley.

To help create awareness for his foundation, and to draw attention to the plight of police families, Wiley traveled throughout Colombia to film five music videos. “Creating, recording and producing the videos has been the number one highlight of my time in Colombia…every trip has been eye-opening for me,” he says. From the logistical challenges of moving the piano he plays around Colombia to mustering a team of actors on the spot, Wiley says that “behind every shot, there is a story and likely even a miracle of how that scene was ultimately produced.” The brightly painted piano is currently on display at the National Police Museum in Bogotá and will eventually be auctioned off, with all the money going to James 1.

One of Wiley’s proudest moments took place at the recent commemoration of the 20th anniversary of the Colombian Finance and Customs Police. “At the end of the concert, a boy about my age, whose father had died in combat, walked onto the stage to thank me for what I was doing at James 1. He gave me a strong hug, then handed me his father’s police bandana. I’ll never forget that moment.”

Besides his social entrepreneurship, Wiley boasts an impressive piano career. He has played to audiences at Carnegie Hall in New York and Kennedy Center in Washington D.C and has clinched first prize at several international music competitions. In his adopted home country he has entertained audiences at the U.S Embassy, National Museum in Bogotá, Pablo Tobón Uribe Theater in Medellín and Convention Centre in Cartagena. In 2017, he won the Colombian National Soloist Competition for age 26 and under.

As Wiley prepares to head stateside to college next year, his plans for higher education combine music and finance. He is currently enrolled in several online courses at Berklee College of Music in Boston.

Wiley will perform for the first time with the Bogotá Philharmonic Orchestra (OFB) at the León de Greiff auditorium at the National University on September 21 (4:00 pm). Colombian conductor Adrián Chamorro will lead a repertoire of Mozart’s Le Nozze di Figaro and Mendelssohn’s piano concerto No.1 in G minor. His Bogotá performance schedule also includes a concert September 20 at the Fabio Lozano Auditorium (7:30 pm). And if interested in donating to Wiley’s foundation: www.james1.net