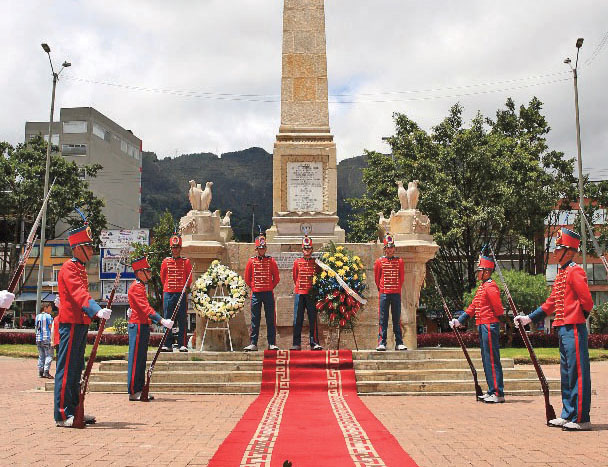 Four streets of iniquity, decay and squalor were taken back from the control of a dangerous drugs sindicate when newly elected mayor Enrique Peñalosa closed down “El Bronx” during an unprecedented police operation May 28, 2016.

A block south of Los Mártires Plaza and Voto Nacional Basilica, El Bronx was a hive of criminality, and given the security risk in this historic district, the obelisk of Danish architect Thomas Reed (1817 – 1878), in honour of the martyrs of Colombia’s Independence campaign, was vandalized and forgotten.

Reed, the son of traders from Saint Croix in the Antilles, arrived in Bogotá in 1848 to design the Capitol building facing the Plaza de Bolívar. In 1880, with the help of Italian sculptor Mario Lambardi, the Obelisco a los Mártires de la Patria was inaugurated. Declared a National Monument in 1975, the 17-meter tall structure stood at the heart of a working class district, home to the first building with an elevator in the capital – the seven floor Edificio Peraza – and graceful neo-classical central rail terminal, Estación de la Sabaná.

As part of the on-going beautification of Los Mártires, the mayoralty returned to this commercial locality to commemorate the first anniversary of El Bronx’s intervention, a spruced up monument that will be adopted by the National Army’s Recruitment Command, which faces the main square.

The restoration of its marble adornments and plaque involved removing graffiti, as well as reconstructing its stone sides. New lighting and a flower garden were also included in this $77 million pesos renovation. “We hope this site will become an icon of the Bronx recovery” said acting mayor, Luis Gonzalo Morales. During a religious ceremony at the Basilica of the National Vote, priest Darío Echeverri extolled the work of Peñalosa in”eradicating two of the largest tumors in Bogotá […] El Cartucho during his first administration, and now, El Bronx.”