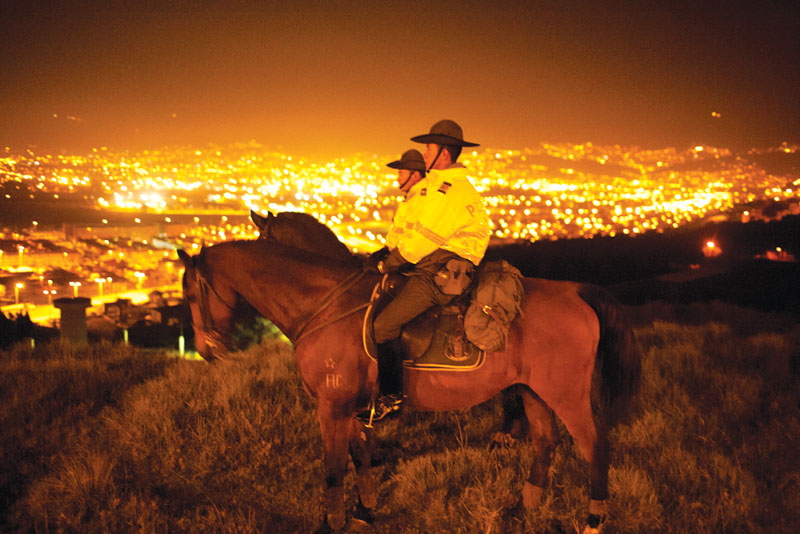 “Looks like a 901” says Sub-Intendant Villanueva, twisting in his saddle to get a better look at the body lying across the street. “901?” I ask. “Homicide,” he replies. “Let’s go get a closer look.”

It is past midnight on a Thursday down in Ciudad Bolívar, one of Bogotá’s most impoverished districts, and I am on the back of a mighty mare ironically called “Socorro” (Help) accompanying two mounted National Police carabineros on a routine night patrol. Barely minutes after leaving the police station, wedged between the foothills of the south and the concrete city, we come across a police car on the side of the road with its blue and red flashing lights illuminating the tower blocks on either side of the street. A body was lying motionless on the pavement and paramedics were hauling someone into the back of an ambulance.

I gave my horse a kick and followed Int. Villanueva across the street to investigate. The prone figure raised his arms and crossed them with an uncomfortable groan. Not a “901” after all. I try to make a relieved joke about the incident being a “902,” but the officer is not in the mood for British humour. A “902,” I discovered, is the radio code for kidnapping. A policeman on the scene quickly clarifies that it had been a double drunken bicycle crash. Nothing too sinister and as neither of them were in a life-threatening condition, we continue our night patrol.

At 34, Int. Villanueva has been patrolling the streets of Bogotá for almost half his life and rides his feisty mount “Iris Coffe” confidently. But down in these parts it is not surprising that he expects the worst – the vast and sprawling Ciudad Bolívar is home to over 2 million inhabitants and crime is a major concern. It is also the barrio where the Metropolitan Police have one of their four carabinero stations, the members of which you typically see riding around northern Bogotá on fabulous horses with beautiful shiny coats.

A 30-minute drive south from the Plaza Bolivar and I feel like I have reached an outpost of civility deep in enemy territory. The base is aptly named “South Fort,” as the patrols that depart from here are almost always high risk since drug gangs hold a lot of power in some parts of Ciudad Bolívar.

South Fort is anything but a resort even though its architectural inspiration seems rooted in the Alps. Pretty wooden buildings with dark chalet-style balconies are offices to the rank and file of Bogotá’s brave. A concrete stable houses some 30 horses. From here – every weekday at 7 a.m. and weeknights at midnight – a two-man mounted patrol sets off on a friendly mission to make their presence felt in the community.

Stopping and searching for small-time delinquents is also part of a routine patrol. More unique to their task list is the prevention of cow and goat theft on the rural fringes of the city, highlighting the horses’ particular advantage in being able to go where vehicles cannot. The all-terrain aspect is particularly important for patrols that operate in the forests under Monserrate, which often requires climbing over fallen logs, ducking trees and forging through thick thorn bushes.

On weekends, horses from all four stations are typically sent in to help crowd control at the football stadium or for heavy metal rock concerts. These days the Colombian heavy metal fan-base seem to be more troublesome than the devil-worshipping, guitar-smashing, bat-head eating, prince-of-darkness rock stars who inspire them.

Patrolling Ciudad Bolivar is a far cry from exercising the Queen’s horses in London’s Hyde Park. Whilst the handsome horses are indeed intimidating beasts to the unfamiliar who might well perceive them as giant kicking and trampling machines, they are surely no match for anyone with a firearm, and this is a very real risk.

Shortly after moving on from the bicycle collision, we see a group of drunken youths fighting in a small park who flee suspiciously when we start to take an interest. We give chase at a trot as they run up a dark alley, and as soon as we have them cornered, Int.Villanueva swing off his horse and orders the four of them up against a wall for a full body search. A younger agent, Cesar Guerrero, stays mounted and unsheathes his pistol, holding it discretely (and very readily) at his waist. No weapons or drugs are found on the youths so they are sent on their way. But it is clear that this patrol takes no chances on the lives of either its officers or their animals.

Without further incident we creep up the hill into the early hours. By 3 a.m. the streets are all but deserted, the only noise being our horseshoes clattering against the concrete and dogs barking down from the roofs of houses. As I follow my two guardians through the dusty streets of this sprawling “ghost town” with their wide-brimmed hats and yellow neckerchiefs, (right hands always resting lightly on their pistols), it is hard not to feel that I an shadowing a pair of “Wild West” sheriffs, keeping the pace, and the peace until the daylight hours.