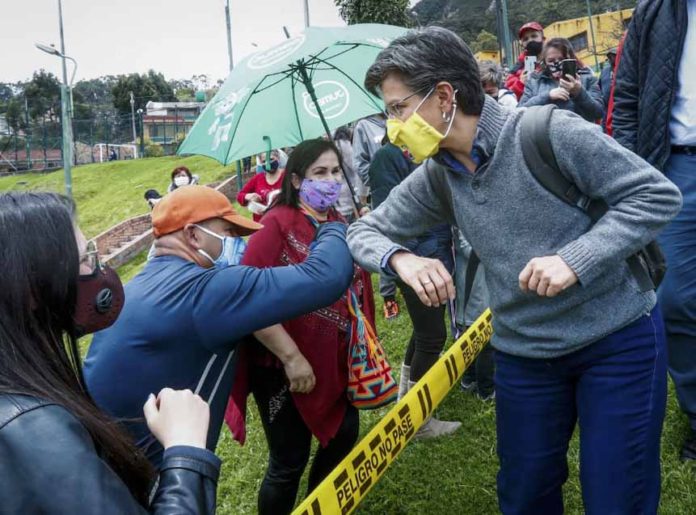 Intensive care occupancy in Bogotá’s private and public hospital system has dropped to 77%, and just a few percentage points above the district’s official Red Alert of 75%. Current occupancy is the lowest since June 28 when Mayor Claudia López warned of a city-wide return to strict quarantine, yet amended to rotating lockdowns that began July 13 when ICU occupancy soared to 91%.

As the last seven localities were scheduled to end strict quarantine on August 31, Mayor López stated Monday on Twitter” “Thanks to self-care by everyone, the district has proposed to the national government that all of Bogotá ends quarantine on Thursday and begins the new reality where we can work, socialize and study.” After five months during which the Colombian capital has endured a deep social and economic crisis with quarantine, López’s announcement coincides with the gradual reopening of the country when the National Health Emergency ends on September 1.

As part of the National Health Emergency, the measure Obligatory Preventive Isolation went into effect with Decree 457 “to limit the free movement of people and vehicles in the national territory […] to guarantee the right to life, health and survival of the country’s inhabitants.” Obligatory Preventive Isolation was originally set to last 19 days. On September 1, Colombia will have completed 159 days of quarantine and country with the longest timeline of the coronavirus pandemic.

The “new reality” for Bogotá raises issues as to which other measures could be enacted to replace the identity card restriction Pico y cédula, limit traffic congestion with the possible return of the license plate restriction Pico y Placa, and hours in which different economic sectors will be able to work to avoid rush hour crowds inside the public transportation network TransMilenio.

When Claudia López declared a quarantine drill on March 19, less than two weeks after the first case was imported, Bogotá had 26 confirmed patients of COVID-19. Today, the total number stands at 188,220, including Sunday’s additional 2,172. Even though Bogotá’s daily coronavirus count continues to fluctuate like the national tally that added 8,044 cases on Sunday to raise the total to 541,147, the number of recovered patients continues to surpass new infections, with 14,238 during the last 24 hours. The rising number of recovered patients has lowered “active cases” to 148,708.

The daily death toll, however, has witnessed even more dramatic fluctuations, with 400 on Saturday – the highest recorded since the outbreak. According to Minister of Health Fernando Ruíz, the high numbers include fatalities that occurred in territories where “verbal autopsies” by health professionals have to be confirmed or invalidated in a process that takes days, even weeks.  “The current high number in fatalities is a phenomenon that is not representative of the current curve,” remarked Ruíz. “There is evidence that we are passing the most critical part of the peak and trend that points to lower fatalities in all cities affected by the pandemic,” he added.