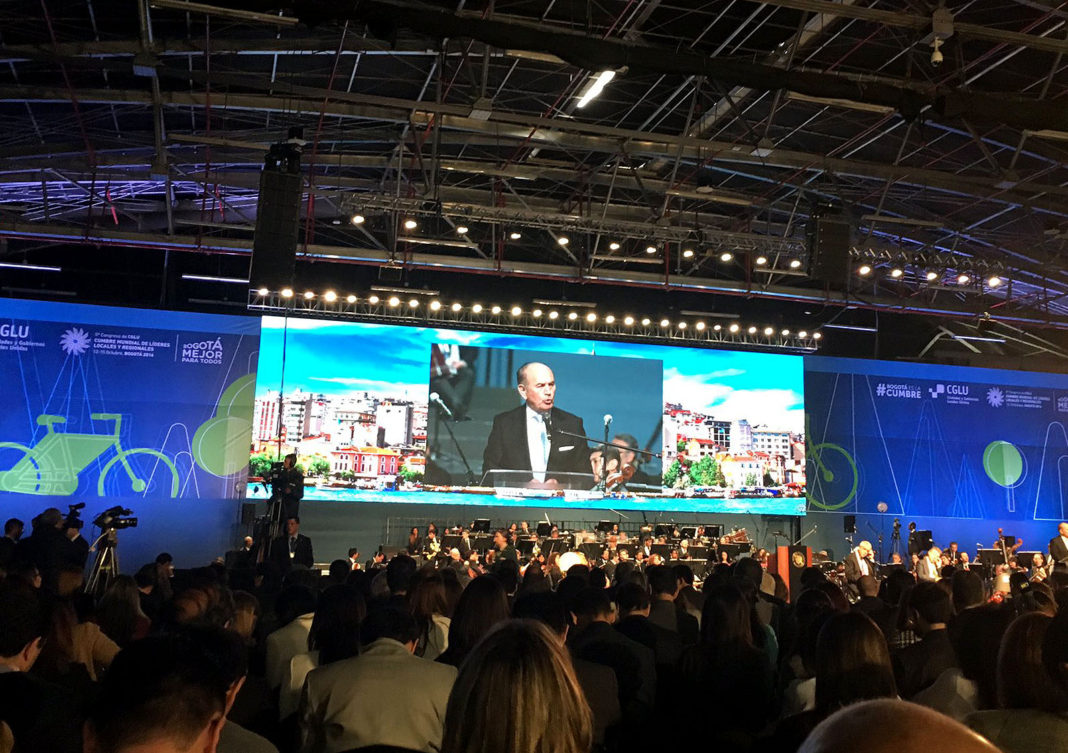 The 5th Summit of The Global Network of Cities, Local and Regional Governments (UCLG) officially launched Wednesday October 12 with representatives from local governments around the world, 500 mayors from five continents and a video message from the United Nations’ Secretary General Ban-Ki moon.

President Santos also congratulated Peñalosa on his efforts to recuperate public space in the capital and stressed that “preserving the environment must be an objective for any sustainable city.”

The Executive Director of UN-Habitat and Secretary-General of Habitat III former Mayor of Barcelona Joan Clos stated during his keynote speech that the “great challenge of the 21st century is finding ways to live happily.”

Ban Ki-moon addressed the audience referring to Bogotá as a strategic urban center and the need for a global public debate on urban development and sustainability. “Local governments represent an enormous opportunity for peace,” said Ban-Ki moon.

Leaders from 100 countries will share experiences and recommendations on how to transform cities into eco-friendly habitats, where resources are key to improve mobility and air quality for inhabitants. The Bogotá Philharmonic Orchestra (OFB) prepared a special repertoire to welcome the international visitors in the company of renowned cumbia legend singer Toto la Momposina and ensemble Puerto Candelaria.

The mayor will also showcase his administration’s program, that includes the construction of the first metro for this capital of 8 million; a longitudinal highway on the western fringe of Bogotá known as ALO (Avenida Longitudinal de Occidente); the recovery of the Río Bogotá, and intervention of the city’s eastern mountain ranges to create an ecological corridor.

Running parallel to the summit, residents of the Colombian capital will have the opportunity to participate in conferences and seminars that make up the Agenda Bogotá 2050 – a strategic plan to project the metropolis into the mid millennium. Discussions include the upcoming territorial ordinance plan, Plan de Ordenamiento Territorial (POT), a guideline by which city zoning will be determined over the next 12 years. “We will have the chance to discuss and learn from others, and show what we are planning to do,” said Bogotá Mayor Enrique Peñalosa during the official launch of the UCLG.

The Agenda 2050 conference and trade show includes a gigantic 3D model of the city and is open to the public at the Corferias exhibition grounds. Admission is free

TransMilenio along Séptima: A contentious debate for Bogotá residents