We drive through the night as a light rain falls and we manoeuver a maze of dark streets, passing shuttered-up store fronts, and vagrants huddled make shift fires. We are in the “down and out” district of the centro, and riding high in a fire truck from Station No.2.

It’s the end of a long weekend – a Puente – and one which for the inhabitants of Bogotá could have been catastrophic. Our driver knows these streets and doesn’t feel that his safety – or ours – is at risk, especially as me make our presence known in the ‘Bronx’ with headlights illuminating a patchwork of dead-end streets and the empty stares of drug dealers on every corner. The patrol is routine for the fire fighters on this twenty-four hour shift. Station No.2 has the duty of patrolling Bogotá’s sinister red light barrio Santa Fe.

“In effect, nothing is happening,” states fireman ‘Nelson’ as the intercom falls silent and our thoughts turn to the quake, which rattled Bogotá a few days earlier.  “We were very lucky,” claims Nelson. “It should be a warning of what might happen.”

Trained in putting out fires, the Bomberos are part of the city’s 123-hotline number and are called to attend any emergency where a fire is not necessarily the most dangerous element. In the Bronx, the threat is firearms, shards if broken glass, being attacked by an infected syringe.

“Emergencies are also seasonal,” claims firefighter Jaime Segura, who has been with the force for more than a decade.  “It depends upon where you live. Emergencies like so much else in this city can be understood by estrato.”

Jaime explains that in the affluent north the many parks present specific problems such as trees falling on cars and damage caused by falling branches. In the city’s center, where the Fire Station No.1 operates, the most pressing issue has to do with the nearby mountains and the risk of forest fires breaking-out in the summer. Just south of the historic La Candelaria, the threat is mostly man-made such as criminal elements setting fire to drug dens or a factory if extortion money isn’t paid up.

Fire Station No.2 attends a sprawling area of small industry and where the risk of fire is enhanced due to lax safety standards employed by shopkeepers and factory owners. It’s also includes the Caracas Avenue and Decima where street crime is rampant and thieves steal gas meters in order to resell their copper parts. “It’s estrato 1 stealing from estrato 3” claims Jaime as we sip another mug of dark coffee at the base, waiting for another emergency bell.

In the south of the city, according to these experienced firefighters, the issues are most domestic and natural. Mudslides during the winter destroy homes built with few if any building code standards. People become trapped in their homes as flood waters rise and improvised stoves and gas cookers are a permanent risk with the elderly, many of whom are left alone during the day, while family members go to work across town.

For the COBB the emergencies never seem to cease nor amaze. Despite the belief people have that firefighters combat fires, the reality in Bogotá is that this force is called out to deal with the wrath of elements. According to Euclides Mancipe of the COBB, the entity attends between 275 and 300 emergencies each day, and of which, 20 percent are false alarms. But the calls keep coming and the teams must attend each and every one. The director believes this capital city is short of some 300 brave men and women.

For fireman John Paredes, attending so many emergencies challenges deep emotions. Unfortunately, he has seen too much loss of life on the job. “We are still human,” he says when talking about the idea some people have that firefighters are immune to the dangers around them.

Despite the onslaught of emergency calls the COBB with its 47 brick-red fire trucks manage to attend emergencies throughout the city. In many instances, the firefighters from one station lend a helping hand to others during an emergency, as was the case back in 2004, when a 50-ton excavator truck fell on a school bus from the Agustiniano Norte school killing twenty-two children. These are the emergencies no one like to remember. The ones, which leave a deep emotional scar.

When the Bogota fire department was founded 113 years ago, Bogota was a town a 90,000 inhabitants and twenty-five men were chosen to keep the city safe from fires. Today, the number of firefighters available to attend emergencies in a metropolis this size should be close to 3,500. The international norm suggests one firefighter for every 2,000 inhabitants.

The COBB has in recent years undergone and important process of modernization. Successive mayors have pledged more funding and support of the task force. Even though more firefighters are needed, for those already in the elite force, “it’s a privilege,” claims Yesid Neira, a firefighter who joined after passing a selection process in which seven thousand candidates applied and only 20 made it. “You have to be an integral person,” he says regarding what motivated him to become a firefighter. “Helping people is the highest honor of this job.” 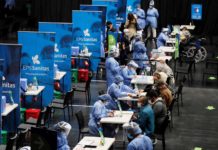