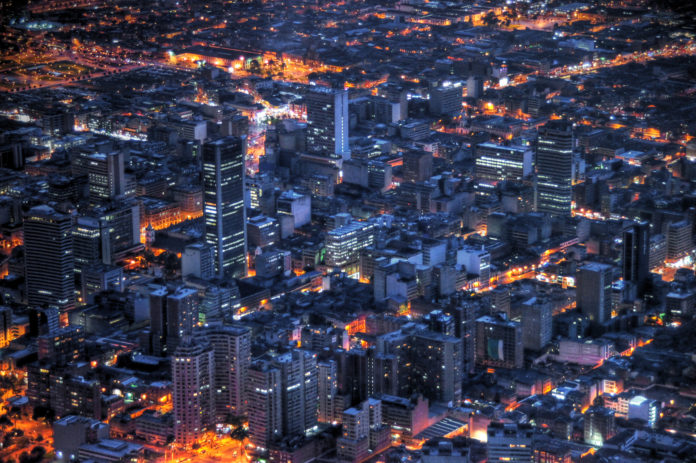 Does Bogotá have an architectural identity? This question may seem obvious given Bogotá’s patchwork of architectural styles and historical influences, and finding a stylistic thread in the urban sprawl depends largely on socio-economic factors.

But, there is one aspect that may not be evident in the eyes of many: Bogota’s architectural identity is strong and a clear reflection of the capital’s idiosyncrasy, from multi-use neighborhoods to commercial and creative districts, as well as specific details inspired by a pluralistic mindset.

Bogotanos have a mental picture of their city that can be summed up as: modern; familiar; chaotic; disorganized; diverse; unforgettable, among many other terms. Then, there are the Cerros Orientales mountains that act as a natural boundary with the eastern-most limits of the city.

Another aspect when describing Bogotá’s architectural identity has been the rapid growth of the metropolis in a few decades and “inventiveness” by some architects to build in complete disregard to the surroundings.

In the mid-1950s, Bogotá began to break away from its architectural uniformity and think large-scale in terms of its road infrastructure and urban development. Across Europe, this same decade witnessed its own transformation of the inner city with monolithic structures replacing the brick and mortar pre-war industrial housing. The trend in many cities around the world was functionality over aesthetics and the prolific use of steel and glass in construction. Bogotá was no exception with the Centro rising upward with concrete high-rise buildings that dwarfed the historical landmarks of La Candelaria, Santa Fe and Los Martíres localities.

On the outskirts of Bogotá, with its 700,000 inhabitants, haciendas owned by some of the wealthiest families started to give way to neighborhoods such as La Merced, Quinta Camacho, Teusaquillo, Retiro, and Bellavista. Usaquén was a satellite community with its own historic landmarks, and accessible to the capital by the Calle Real (Royal Road) today known as the Séptima.

Many of the traditional neighborhoods were inspired by England’s rural architecture, adorned by flowering gardens, tall chimneys and inlaid wood. Today, many of these graceful homes operate as embassies, galleries and restaurants.

With European influences on every corner, and at a tine when men wore hats and women expensive furs, the arrival of immigrants to Colombia’s most modern city doubled the population to 1,600,000 by 1965. Bogotá then enters a new stage of architectural development with multifamily housing for a fast-growing middle class and recognition given to pioneering architects, among them Germán Samper, Dicken Castro and Rogelio Salmona.

For Eugenia Concha, design director of the Mazzanti Group, the way in which the city has continued to grow has generated a demand in construction that still meets the needs of people from different places. It is precisely this that motivates many to think that the capital has lost its architectural “identity” and how a multiplicity of styles in different communities has obscured the uniformity many recall with bouts of nostalgia. Describing Bogotá as a capital of Republican, English, French, colonial or modern architecture is a mistake because, in reality, they all come together – or even better – are mixed. This happens because commonly used terms refer to the homogeneity of specific constructions, allowing them to be grouped together, but come up short when trying to define a larger architectural identity. Silvia Arango is a leading authority on Colombia’s architectural history and claims that this confusion is also based on the fact that architectural critique comes from the history of art, which is based mainly on styles rather than specific spaces. Therefore, if the identity of a city is homogeneity, only cities like Venice and Paris, would qualify.

To define an architectural identity for Bogotá based solely on historic terms could be erroneous, especially if one takes into account that just 0.2% of the city’s buildings are listed as Heritage. And, having an architectural identity doesn’t mean that it always has to be based on originality either, because the way one describes a place often has more to do with the way the inhabitants use the space. “Cities, after a common language, are the most important expression of a collective,” states Arango. “We are permanently updating, enriching our cities – it’s long-term creation. Bogotanos have created a city that expresses the inclusive “us,” and an identity that is not obvious, contradictory, frenzied, with its ups and downs, yet very strong. In fact, more than of other capitals.”

Having established that Bogotá’s architectural identity isn’t so much about specific styles, but an outpouring of collective emotions, according to Arango, there are distinctive features typical to the capital as an Ajiáco. First, the uncoated brick used in buildings, public spaces and housing, regardless of socio-economic strata. The explanation of the wide usage of brick is the finished product of a distinctive tradition of the Bogotá plateau: artisanal brick firing in kilns, or chircales in Spanish. Packed with sand and clay from what used to be a high-altitude lake, the bricks are impregnated with unique compounds specific to each quarry, with orange one of the most prevalent colors.

The earthy hues caught the attention of architect Rogelio Salmona (1929-2007) and influenced many of his outstanding structures, among them the Museum of Modern Art of Bogotá, Torres del Parque and Biblioteca Virgilio Barco. Another characteristic of Bogotá’s architectural style is low-level construction. Even though Bogotá’s cityscape is witnessing an important transformation with new high rises clustered in the Centro, the Colombian capital continues to expand horizontally instead of vertically compared with Buenos Aires, Santiago or Mexico City. “It’s not an obvious city. Like interesting women, it is discovered little by little, in the details. It has the capacity to see up close, which gives it a loving, domestic quality,” states Arango. “This is evident in the gardens, neighborhoods, street separators, squares and parks,” she says. One example of this, is the Centro International. “The architects Obregón and Valenzuela of the Bavaria complex were delicate in the way they renovated the windows and beams. There’s an attention to detail,” states Arango. The most eye-catching feature of the Colombian capital is not manmade, but rather its prized location at 2,630 meters a.s.l in the Eastern Cordillera. Framed by the Cerros Orientales, the green corridor gives the capital a distinctive character and natural canvas to develop architectural creativity.

Though skeptics abound and often difficult to refute from simple observation, Bogotá’s architectural style is also defined by disorderly planning and improvised construction. In recent years many large buildings have been built neglecting the vital spaces in between. “The Centro is going to be filled with tall buildings,” believes Arango, “but we cannot see that we are building a city that raises the value of public space or the living standards that come with social development.” The architect also claims that the voracious pursuit of profit has allowed the construction of large projects void of urban sensibilities. “Builders are rich and becoming richer.”

There is something strange about thinking of a metropolis in abstract terms, and generally cities are defined by their geography and history. By understanding Bogotá’s architectural identity, we can gain insight into the type of urban development the city requires for a sustainable future, and one aligned with an inclusive culture; otherwise, entire neighborhoods are likely to be bulldozed with the land grab of resisting green spaces to make way for buildings out of context with the everyday needs of nine million inhabitants and counting.