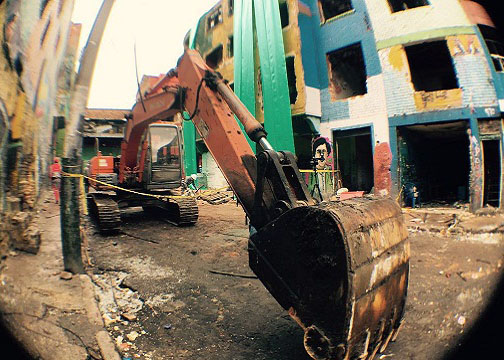 After months closed to any public viewing and one of Bogotá’s most infamous crime scenes on Wednesday, August 10, the streets of ‘El Bronx’ received a welcome visitor: a demolition excavator and that began tearing at the orange painted façade of the four storey “chop-up house” – casa de pique.

At the heart of one of the worst drug and crime “ollas” in the capitals, the casa de pique was run by a crime syndicate – los sayayines – who controlled the drugs trade within the El Bronx and tortured suspected informants of passing on information to the authorities of the extent of the criminal activities taking place within the four street blocks of the Los Martires district. “In this house, most of the criminal activity was concentrated in the El Bronx. People were imprisoned and suffered all kinds of torture,” said Mayor Peñalosa.

The casa de pique is one of sixty-six buildings to be demolished over the next five months making way for an urban renewal project that will cover 1.7 hectares and cost 35,000 million pesos.

As the excavator extended its boom to close one of the city’s most infamous Penalosa was blunt: “We will never again allow the existence of independent crime republics in Bogotá”.

Colombia’s President Juan Manuel Santos also praised the efforts of the mayoralty I helping the hundreds of transient homeless victims of the micro-drug cartels. More than 2,000 persons moved through ‘El Bronx” everyday, either as local residents of the derelict area, or addicts in search of illicit drugs.

“The most important issue here is people. This year we have placed 12,000 from the street into hostels […] and are providing support in helping them rebuild their lives after plucking them out of the hands of criminal organizations, “said Peñalosa.

The demolition of “El Bronx” involves 120 workers who must advance carefully to avoid safety hazards such as collapsing roofs, broken glass and makeshift tunnels built by the sayayines to hide weapons and drugs.