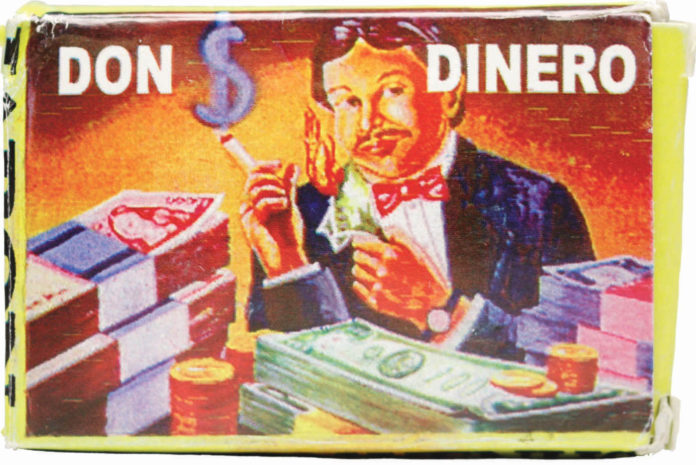 Every household has soap either in the kitchen or the bathroom. But, what if this humble bar of soap contained awesome powers that could help you to realize your wildest dreams?

This might be the case if you have bought your soap in any of the markets of South America. Look again at the soap – does it have a pentagram on it? Or does it have ‘Jabón Esotérico’ embossed into it? If so, then you are washing with Magic Soap, and it can help you gain your fortune, steal the heart of your most desired, overcome addictions, or overpower your enemy!

I was introduced to the phenomena of Magic Soap (simply known as Jabón) in 2015 while visiting a friend and researching modern day magic in Quito, Ecuador. One afternoon I was taken to a small side street where there was a door leading to seemingly chaotic room full of plants, herbs and candles. My friend spoke to the lady (I had no Spanish at the time), and she dug out a battered, dusty cardboard box that smelt of perfumed flowers. Inside were small boxes of soaps in a kaleidoscopic array of colours and designs.

One of the most striking things about Magic Soap is its packaging. Each box has an image on the front that gives you a multi-coloured visual hit that instantly explains what the soap does, and how it will benefit its user. For example, Jabón Don Dinero has a picture of a debonair man dressed in a tuxedo, surrounded by stacks of cash, and lighting his cigar with a fist full of $100 notes. Celebrating his success, he blows out a smoky dollar sign. Don Dinero soap can be used by men if they need luck with gambling, business, or any other kind of monetary gain.

Another example is ‘Amansa Guapo’, meaning ‘Tame the Handsome’. Amansa Guapo soap has a picture of a man dressed in a pinafore, frantically sweeping the floor. Presiding over him is his wife – brandishing a giant rolling pin – and reigning supreme in this relationship. Amansa Guapo soap can be used by women who have unfaithful partners, or husbands that are not pulling their weight with chores.

As well as earthly issues such as money and relationship difficulties, Magic Soap can also offer spiritual assistance. There is a whole range of soaps that draw on the powers of Catholic Saints, regional Folk healers, popular mythical figures, demons, and gods from Santería, Hinduism and Buddhism, amongst others. Images of Saint George spearing a dragon, Satan being vanquished, or Ekeko (Bolivian god of plenty) providing his followers with what they need – are situations depicted vividly in eye-catching colours on the soapboxes.

I have bought magic soaps in the markets of Ecuador, Mexico, Chile, and most recently in Colombia, where you can either find them in the plazas of southern Bogotá, including one much visited pilgrimage site, the 20 de Julio square adorned with a much venerated statue to the Divine Christ Child.

Clues as to the history of these intriguing products can be gleaned while studying their boxes. Magic Soaps claim to draw on the powers of beings from a range of religions and be- lief systems. We know that during the conquest, in the early 1500’s, Catholicism from Spain, forms of Vodun from Western Africa, and a general lingering belief in European medieval witchcraft were brought to the Americas.

Over time, these beliefs, cosmologies, and practices mixed together with those of the existing Aztec, Inca, and other indigenous peoples to form syncretic religions, some of which exist today, such as Umbanda and Candombé, which flourishes in Brazil, or Santería in Cuba. Certain Catholic dates in the Mexican calendar, such as Day of the Dead, or the Day of the Holy Cross in Guerrero state are particular to that part of the world for its unique mixture of European Catholic rituals (going to Mass), and practices that have survived from before the conquest (Masking and dancing).

Many, if not all of these faiths use water and other liquids to ceremoniously wash, renew or purify their followers, or to make important offerings to their gods. One of the most important of the Aztec gods is Tlaloc, who is the god of rain and thunder, venerated in washing rituals. Blood was sprinkled on the ground by Aztec rulers to ceremoniously cleanse the earth for crops to grow. Catholics use blessed water to cleanse and initiate new members through Baptism, while Vodun shrines are kept meticulously clean by small teams of worshippers.

These washing and purifying rites may have informed the notion that washing with a bar of soap can, in some way, alter your destiny, and that this might be done while preparing to leave the house each morning. Through Magic Soap you can alter your luck, find perfect love or heal physical and spiritual ailments for a small price. That is, if you believe in their magic.

TransMilenio along Séptima: A contentious debate for Bogotá residents