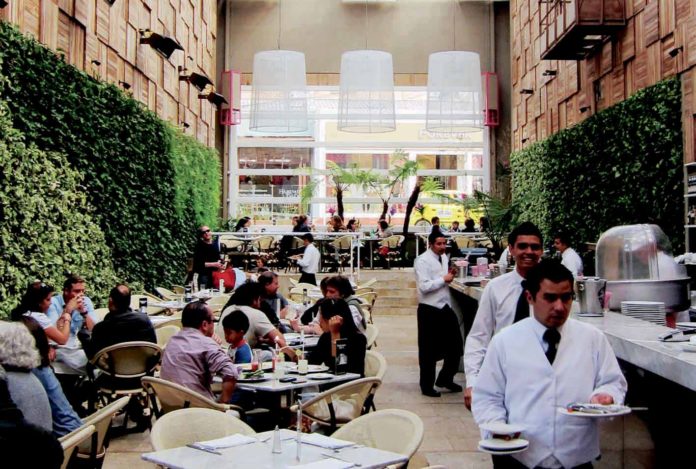 Bogotá’s gastronomy scene has been decimated by the coronavirus pandemic, clearing the tables of many of the city’s respected dining establishments, from traditional eateries and bakeries to top-tier restaurants. Heralded as one of Latin America’s most vibrant and eclectic food destinations, after more than four months of restrictions to attend sit down clients and relying only on take-away to generate operational revenue, many familiar names on the culinary circuit have closed, leaving in their wake, empty real estate.

Among the growing list of restaurants that have closed was the popular  watering hole Harry’s Bar and stalwart of Bogotá’s after-work comfort food scene.  As an obligatory stop for the first-time visitor to the capital given a glass-ceiling patio, open kitchen and fireplace lounge where drinks came served in generous portions, the legacy of Harry’s Bar will be tough for future restaurateurs to emulate, from continuity in the business to its highly professional and courteous wait staff.

The news of Harry’s demise came weeks before Club Colombia, and another partnership by executive chef Harry Sasson, closed its doors ending an era of serving iconic Colombian dishes. Club Colombia’s Sunday Brunch was ranked among the best in the city and all-day fare for local literati and politicos. Balzac, with its all French-inspired menu, also called its quits after more than two decades facing the entrance to the Zona T. Brothers Rausch – Mark and Jorge – known for their role as Masterchefs in the popular television reality, also shuttered four of their Bogotá establishments (Local by Rausch, Bistronomy and Rausch Energía Gastronómica), remaining at the helm of award-winning Criterion. “When you work for 15 years, it is very sad to see your dreams vanish,” said Mark Rausch. “We need to focus on what lies ahead.”

Bogotá’s food and beverage sector is the largest jobs generator for formal and informal workers, and as the pandemic rages on, long-term unemployment could have nefarious social consequences. According to Mark Rausch, many restaurants based their financials on the pandemic ending by December 2020, and this, will only result in more debt and bankruptcies.

In the much promoted Gastro Zone (Zona G) between Calles 65 and 72, some of the venues that have abandoned the foodie scene are Phillipe, Freshii, Pozzetto, Guapa, La Canoa and Gordo.

With the majority of Bogotá’s restaurant laborers either furloughed or dismissed from work, the district administration of Mayor Claudia López announced that as of August 28, restaurants will be able to reopen under a pilot scheme where outdoors terraces and sidewalks can be used to attend guests and maximum capacity will be limited to 35% – 50%. Among a slate of biosecurity protocols is reserved indoor seating on weekends. The measures presented for approval to the national government aim to salvage one of Bogotá’s most internationally recognized clusters, yet diners may be skittish for months to come to enjoy a meal even at two-meter socially-distanced tables.

For Mark Rausch, the pilot reopening will hardly cover costs given the seating ratio and fact that Bogotá’s inclement weather impedes most fine dining establishments to have open terraces. “I don’t blame the government because no one knew of the pandemic, but with the current protocols you probably end up losing money. It’s not worth it.”

Unlike the conglomerated airline industry where transnational companies have banded together to lobby governments for huge bail-outs, Bogotá’s restaurant owners claim that the pilot scheme for reopening doesn’t address the needs of an industry with supply chains that extend beyond cities to benefit the livelihoods of vulnerable communities that depend on farmers, foragers and fishermen. And such has been the fate of many eateries that succumbed under financial pressure with the pandemic, including Abasto in Usaquén, admired for its dedication to sustainable agricultural practices.

Coronavirus will transform Bogotá’s gastro scene as we know it and true “reopening” remains a distant prospect given discouraging numbers with rising infections. Even though August is the month in which the capital is expected to cross the threshold of the “peak,” announcements by the district to build a post-COVID-19 future for Bogotá seem elusive – or at best – surreal, given that on Tuesday, the city registered an additional 4,955 cases. Colombia broke a new daily record with 12,830 cases after 40,101 PCR tests were processed, putting the national total at 410,453. The country also reported 321 victims of the virus on Tuesday, raising the death toll to 13,475.

The district’s pilot scheme for the planned reopening of restaurants comes as Mayor López added three localities (Usaguén, Teusaquillo, La Candelaria) to a strict 14-day lockdown starting August 14, and home to many of the city’s most innovative restaurants. And yet another blow to a sector, that like Bogotá, is teetering on the brink of a financial calamity.