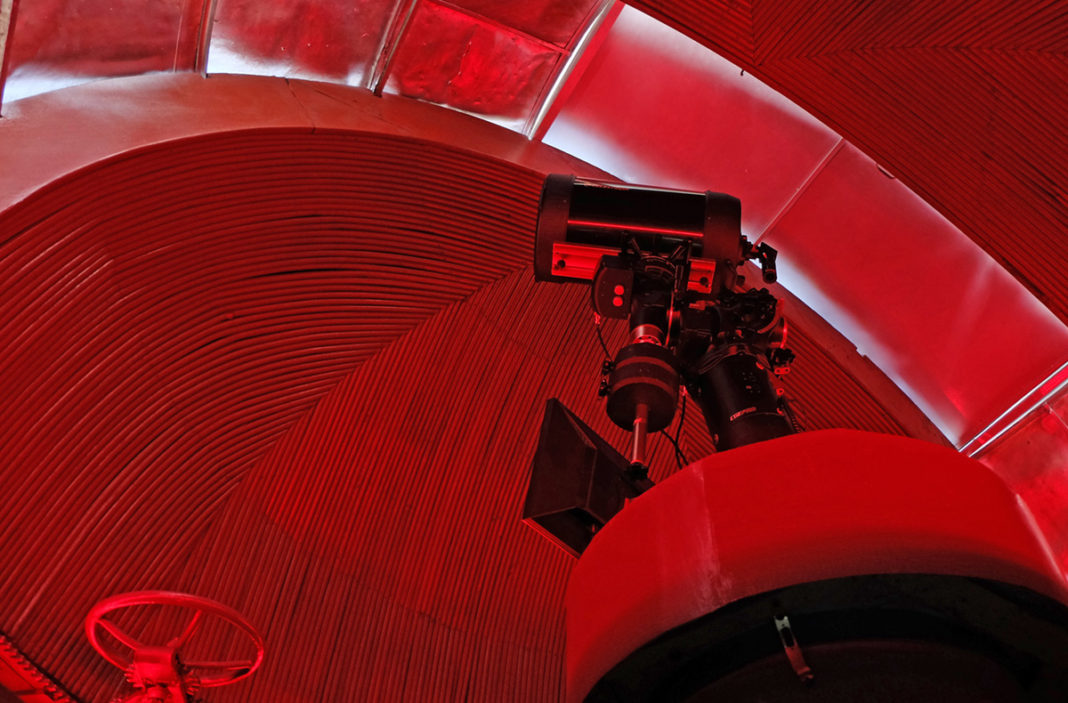 On the night of July 19, 1810, José Francisco de Caldas got together at the National Astronomical Observatory with other criollo intellectuals, among them Camilo Torres Tenorio, Antonio Nariño, José Acevedo and Antonio Baraya. They gathered not only to observe the stars.

The following day, Santafé was the site of the protest against Spanish rule, known as the “Cry of Independence”, which began the long and troubled sequence of events ending in the birth of the Republic of Colombia at the Battle of Boyacá on August 7 1819.

A poem by Pablo Neruda gives us an idea of what Caldas and his erudite companions must have felt when they looked at the stars and plotted their rebellion against the Crown:

“Reaching out at the night, on the terrace of a very tall and sullen skyscraper,
I could touch the nocturnal canopy and in an art of extraordinary love I grabbed a celestial star”

The Observatory was the brainchild of José Celestino Mutis. The original idea of the Spanish-born scientist was to study the differences between what is seen in the heavens of America and Europe adorning its grounds with local flora which botanists could study.

The architect was Domingo de Petrés, a Capuchin monk who also designed the Primatial Cathedral of Bogotá, the city’s aqueduct and the church of San Victorino, among other neo-classical buildings which are still standing. The site he chose now forms the downtown intersection of the Carrera Octava with Calle Octava, within the precincts of the Casa de Nariño, the seat of the Colombian Presidency.

At the time of the Independence, the tower of The National Observatory was the first “skyscraper” in the Americas and for the passerby, was so tall, it reached for the stars.

Petrés managed to obtain the blueprints of the Paris Observatory for an equally impressive building facing the Plaza de Bolívar. Construction began in 1803 and with its copper dome, was intended to meet the standards of its European rival. Mutis’ study of the stars formed part of a broader investigation of natural history, known as the Botanical Expedition, that lasted 30 years, and classified more than 20,000 species of plants and 7,000 species of animals in the Viceroyalty of Nueva Granada.

José Celestino Mutis was a Spanish priest, geographer, mathematician, teacher and doctor, but on his arrival in America, he focused on botany, biology and astronomy. He was one of the first in the world to study the skies near the Tropic of Capricorn.

After the death of Caldas, now hailed as a Founding Father of Colombia, the Observatory fell into neglect. In 1854, the tower, which was in the hands of the Military College, was no longer used for scientific research and became an ice cream shop.

During one of the many civil wars of the 19th century, shots were fired from the dome at the church of San Agustín and, in 1867, it was used as a prison for the overthrown president, Tomás Cipriano de Mosquera.

When the Casa de Nariño was inaugurated in 1908, the National Observatory was in disuse and seven decades later President Alfonso López Michelsen ordered renovations to its tower, preserving the original frontages and gardens surrounding the palace. The Observatory however, became the property of the Universidad Nacional de Colombia. As though it were fated by the stars, López Michelsen is now honored on the new $20,000 peso banknote, the old version of which depicted the mathematician Julio Garavito, standing alongside an image of the Moon highlighting the Garavito Crater. This homage was made by the International Astronomical Union in 1970.

The “OAN” (National Astronomical Observatory of Colombia) marks the zero point of the longitude and latitude of Bogotá and Colombia. Standing at the intersection of two eights (the avenue and the street), it would also seem to indicate the eight planets in our Solar System. The very center of the white building once housed the “Meridian of Bogotá”, which was the standard for drafting maps of the country.

The very first photograph of Bogotá, on November 27, 1842, was taken from what was then known as the “Street of the Observatory” (Calle del Observatorio, now Calle Octava). Although the white dome is no longer seen in the faded black and white photo, it is known that the photographer Baron de Gros chose that site because it was at the time the most important landmark in the city.

For 80 years, it was the tallest building in Colombia, affording a spectacular view of a modest city and its surroundings.

In 1975, it was declared a National Heritage Building, in view of its historical importance and French neo-classical style. Sadly, this monument is now falling apart. It is so deteriorated that the old floor boards creak as you walk on them worsening the damage.

Santiago Vargas, head of the National University’s departments of Instrumentation and Observation of Cupolas is concerned about the current state of the “country’s most important building” and is initiating efforts to save it before it is too late.

Within the dome lies a refracting telescope from the 1940s that is unfortunately in very poor condition. Similar to modern equipment, the telescope uses lenses instead of mirrors and as a result of the building’s deterioration can no longer be used to watch the sky as the dome cannot be winched open.

While the Universidad Nacional de Colombia was founded in 1857, it was not until 1948 that the first cupola of its Observatory was built. Jorge Arias de Grieff was one of the astronomers who promoted and witnessed its construction. Its original structure – a guadua– bamboo roof and a sheathe of copper – is still intact, as is the manual method for opening the dome, but its telescope is the best the university owns and has only been used for a year.

Four years later, the second cupola was inaugurated. It houses the biggest mirror-telescope in Colombia, which was installed in 2000. It has an inclination of four degrees above the horizon, which is strange for the European scientists who visit it, since they are used to inclinations of 48 or more degrees, due to the latitude in which they work.

Vargas says that, while the sky of Bogotá is too cloudy for observing the stars, the instruments that are used and the methods of teaching astronomy are the same as in the rest of the world. And even though Bogotá may be “2,600 meters closer to the stars”, as its tourist board puts it, that does not mean we can observe them better: the climate and luminic contamination of the city prevent it.

“Although our climate isn’t ideal, we try to open the dome as often as possible because we enjoy watching our stars above,” said Vargas.

Astronomy is one of the fields of science the general public is most interested in. The Bogotá Planetarium is in charge of this difficult task: it does not have an observatory but works with binoculars and telescopes. It is, in fact, the place where Vargas’ passion for astronomy was born, and at the age of three he was curious to find out what lies beyond the blue mantle above us.

The Universidad Nacional is also engaged in a project to attract a new public to astronomy, called “Thursdays beneath the stars.” It consists of talks, open to the public, which are organized by Giovanni Pinzón, coordinator of the extension program of the “OAN”. Every week experts talk about a different subject in a way that is accessible to children and adults who are not specialists.

What’s more is that if the meteorological conditions are right at these events, the public will have a chance to observe the starts Neruda described as “trembling crystals with a diamond body.”