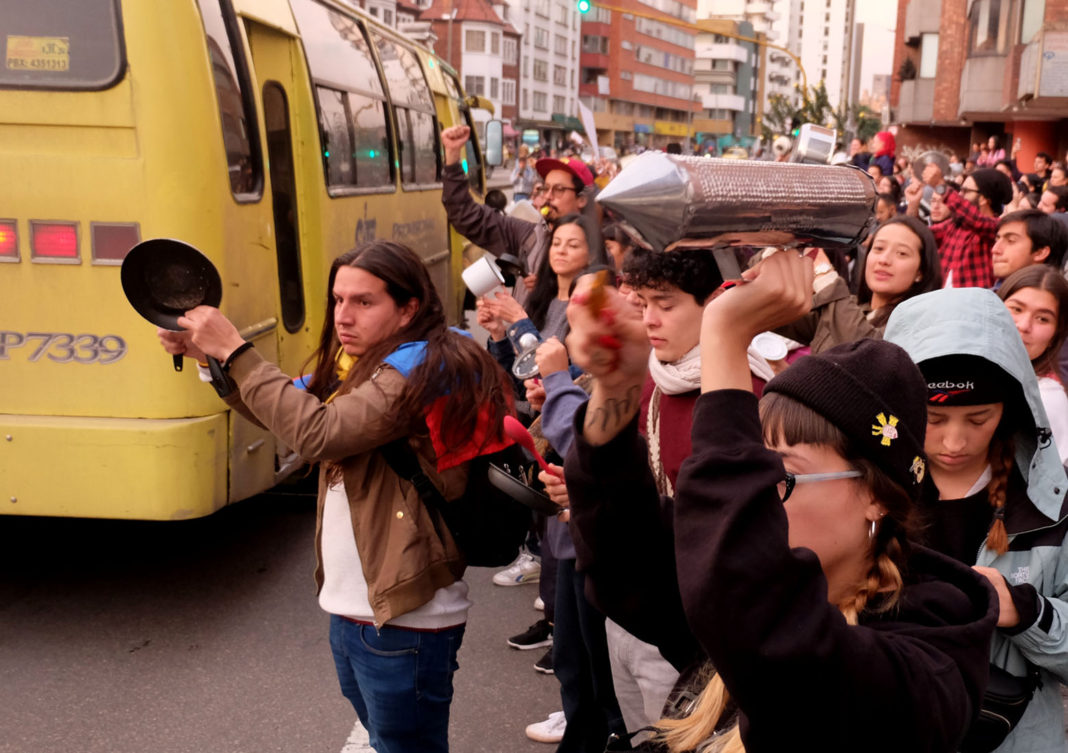 The Bogotá Mayoralty has released a list with the locations where anti-government protests will take place Tuesday, January 21, in support of the National Strike – Paro Nacional. The District Secretariat also outlined the protocols in place to ensure peaceful mobilizations and public safety.

The mobilizations begin 5:00 am with a sit-down protest (plantón) at the TransMilenio terminal Portal del Norte. Another focal point is the Technology Faculty of the Universidad Distrital on Calle 80 with Avenida Suba.

Demonstrators will gather at 8:00 am in Hippies Park (Parque de Los Hippies) on Carrera 7 with Calle 60, with students from the Universidad Distrital University taking part in the protests on Séptima with Calle 40. The Séptima will be closed from Calles 63 to 32 as of 11:00 am.

At 2 pm another protest is planned at National Park (Cra 7 with Calle 39) before demonstrators head to the Plaza de Bolívar. At 5 pm, cacerolazos are planned in various city squares and parks.

A protest in the morning has also been announced near the monument of Los Héroes (Calle 78 with Ave.Caracas), and road blockages are expected at the intersection of Calle 93 with Carrera 15, and Calle 116 with Carrera 15.

The National University protest begins at 11:00 am along Calle 26 towards Carrera 33 and Ave. Boyacá.

The district’s Secretariat will be present in the main bus terminals of Transmilenio and follow the marches so that they do not cause road blockages or vandalism to public and private property.

The protocols announced by Mayor Claudia López are as follows:

1. Those who attempt to block roads and public transportation will receive “a social sanction from fellow protesters.”

2. If this doesn’t dissuade or move vehicular traffic – 100 appointed Madres Gestoras de Paz y Convivencia will act as mediators and pacifiers, accompanied by members of the district’s Coexistence teams.

3. If the Madres Gestoras de Paz y Convivenia (Mothers of Peace and Coexistence) cannot prevent acts of vandalism, the mayoralty will then ask for police intervention.

4. And if the security situation worsens, the anti-riot squad – Esmad – will take to the streets “as a last resort.”

Mayor Claudia López was confident Monday that Tuesday’s marches will be conducted peacefully, releasing a statement in which she assures Bogotanos that: “We are fully organized to apply our protocols as we did last week. We have to learn to listen to each other from our differences.” López added that: “We have no information that worries us and makes us think that something other than the peaceful spirit of these manifestations will happen.”