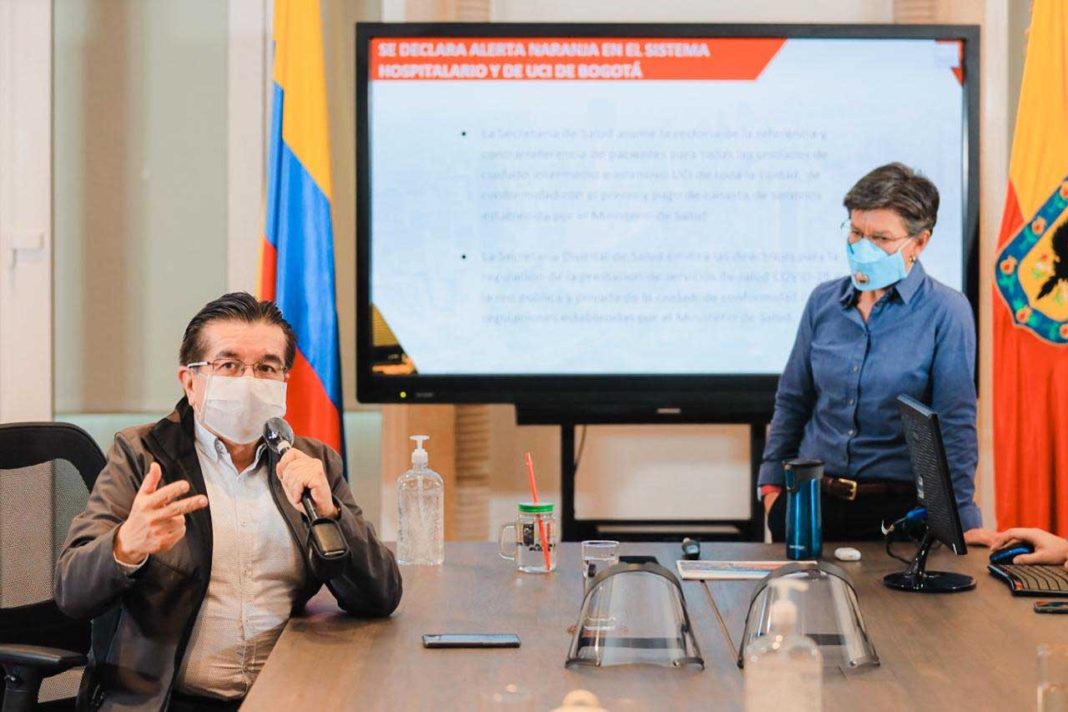 It was a grim start to the first bank holiday weekend in June as Colombia surpassed 50,000 cases of coronavirus and marked the highest single-day death toll on Sunday with 75 fatalities, putting the nation’s total at 1,667.

With 19 deaths from COVID-19 confirmed in Bogotá, according to the daily bulletin of the National Institute of Health, and 47 in coastal cities and towns, including Cartagena, Barranquilla and Santa Marta, Bogotá Mayor Claudia López announced the “new measures” for the capital given that ICU units are at 54% occupancy – or 388 of 722.

Accompanied at the virtual press conference by Minister of Health Fernando Ruíz and district’s Health Secretariat Alejandro Gómez and for Government Luis Ernesto Gómez, Mayor López had stated on multiple occasions, since the first case of coronavirus was confirmed in Bogotá, that should ICU occupancy reach 50% the entire city would be placed under an Orange Alert with strict quarantine.

However, given that Bogotá residents continue in Obligatory Preventive Isolation as decreed by the national government until July 1, López detailed how the epidemiological curve in different parts of the capital is showing promising results, while in others, remains of serious concern for health authorities.

Thanking the residents of five neighborhoods in Kennedy, for having completed an additional two weeks of strict lockdown, a locality with more than 1 million inhabitants, as of Tuesday, neighborhoods in Suba, Ciudad Bolívar, Engativa and Bosa have also been placed under Orange Alert, with restrictions on mobility, until June 28.

While Bogotá continues to gradually ease into productivity and 60% of the population – and an estimated 5 million – are back circulating on streets, the Orange Alert was extended to cover the city’s healthcare system, unifying access to all ICUs for COVID-19 patients regardless if the hospital is public or privately operated.

All patients who develop life-threatening symptoms of the virus will be referred to an ICU by the district’s Health Secretariat and coordinated with the Urgencies and Emergencies Regulation Center (CRUE). “The objective is that all citizens have access to the health system regardless of payment schemes, EPS insurance plans or income,” stated Minister Ruíz.

The government also assured Mayor López that an additional 145 ventilators will be available in the city as of this week, and an order of 120 to be received every fifteen days. “Ninety percent of all COVID-19 patients will remain at home given their medical condition, but those who require an ICU will be cared for by the District,” stated Secretariat Gómez. “The district is committed to regulating this.”

Among other announcements made by Mayor López is the introduction of Pico y Cédula as of Tuesday, June 16.

The measure Pico y Cédula restricts access to all shops, supermarkets, pharmacies and financial entities for residents based on the last number of the identity card. For those with cédulas ending in an even number, the off-limit days also end in an even number. The same rules apply to those with odd numbers on odd days. “The police will not be in charge of checking cédulas,” remarked Claudia López, emphasizing that enforcing these new restrictions depend on each establishment. Pico y Cédula does not apply to those authorized back to work.

Mayor López’s tone was conciliatory in regard to the government of President Iván Duque’s commitment to ease the burden of Bogotá’s ICU capacity and strong sense of inter-governmental collaboration. The Mayor also sympathetic to the plight of many Bogotanos who endured extended lockdowns as the capital began its economic reactivation. Among new protocols to be announced this week is the reopening of metropolitan parks for leisure activities and where social distancing must be respected.