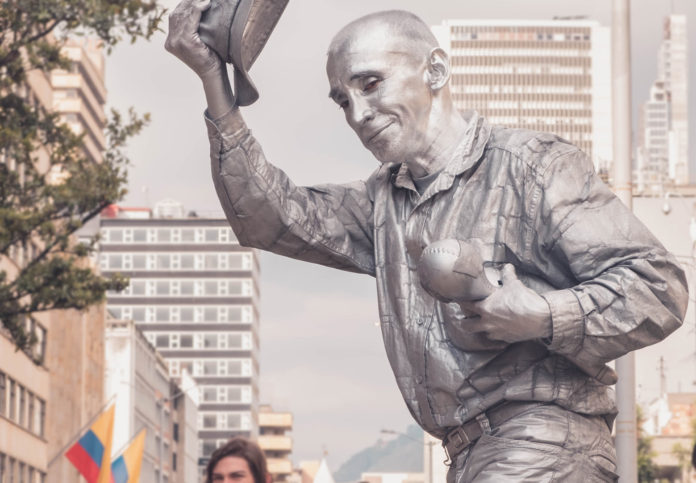 If not affection, I feel a special attachment to the downtown Séptima, because my first home in Colombia was nearby, and I roamed it daily and sometimes late at night, which was risky in the epoch of President Julio César Turbay (1978-1982), when hippies were a favorite prey for the security forces. Regarding it forty years later, I’d call the subsequent changes a facelift rather than gentrification. Atmospherically, it is still the same hectic, often vulgar but diverting Times Square of Bogotá.

And nearly as dense with stores, restaurants, boulevardiers, vagrants, sidewalk sales and street acts, so that I divide this reportage into several installments. We begin by descending Salmona’s* esplanades from the Torres del Parque, inspired by a famous poem written by Jorge Zalamea in 1963, inspired, in turn, by his visit to the steps leading down to the River Ganges and, implicitly, a metaphor (not altogether outdated) of the sordid Bogotá of his day, seen after years as a political exile:

I note the first sign of improvement in the formerly dilapidated Parque de la Independencia, notorious in my early days as a nighttime haunt of muggers and queer-bashers, but now well-groomed and patrolled, so you can safely walk by the strange juxtaposition of the domed Planetarium and the adjoining pens of the Moorish bull ring Santa María; sunbathe on the hillside lawns dotted with wax palms, eucalyptuses and flowering shrubs; and examine the granite bust of Copernicus: a rare example of public statuary which is truly art (but no longer see the massive meteorite which once stood alongside the Planetarium).

Veering to the left (past an outdoor gym with bare-chested musclemen), we reach the Quiosco de la Luz, a replica of the Belvedere in Maria Antoinette’s Petit Trianon, an octagon with tall doors of colored glass, topped by triangular pediments and interspersed with Greco-Roman bas-reliefs. Erected to commemorate the 100th anniversary of the nation’s Independence, it was the work of the cement company owned by (the yes, presidential) Samper family, which monopolized the country’s production of cement (hence the material of which it was built) and the city’s supply of electricity, (hence its name, derived from the star attraction of the industrial fair which inaugurated it, the then astonishing electric lighting). Neglected for decades, it has been restored as a district-run tourist information office.

In addition to the Punto de Información Turistica kiosk, period photos evoke those innocent days before the park was eviscerated by the Avenida 26 (1952). Here again, there are plans for a facelift, already implemented by the stepped plazoletas which bridge that thoroughfare: a pleasant refuge for shoppers and office workers with an outdoor “photo museum,” Wifi service, street theater acts and a Tostao café in what looks like a ship container.

The idea is to form a “cultural corridor” which, starting at the Bogotá Museum of Modern Art (Mambo), on the south side of the 26th, would run through the park, pass the bottom of the bull ring, demolish the enclave of old houses just below the 27th with Quinta (facing the north side of the bull ring) and then, on the 28th, expand the Museo Nacional by seizing the campus of the Colegio Policarpa Salavarrieta, a public high school, and continue to the Parque Nacional (bulldozing some of the historic mansions of La Merced along the way?).

If so, I object, because, it would evict my neighborhood cobbler on the Calle 27 and high school kids enliven the area around the Museum more than a sterile assemblage of galleries, boutiques, and open-air conceptual artworks would. I suspect that its real purpose is to launder the “image” of Bogotá and attract foreign “investment.”

How long it would take is another matter: the controversy surrounding the corridor is nearly as old as that of the Metro, plagued, as the former has been, by similar shifts of design, problems of financing, feuds between members of the cultural, political and architectural establishments and protests from those whom it would displace. However, there is one sign it may happen: the Mayoralty’s recent decision to shift the seat of the high school to a lot on the Cerros Orientales, just above the Circunvalar, near the campus of the Universidad Distrital, an indication, in turn, that the valiant gals of the Policarpa Salavarrieta (which only became coed recently) did thwart a nasty plan to move the school to a slummy industrial district way downtown.

That said, we move to the anteroom of the Septimazo: the stretch between the foot of Bicentenario park, with its stalls selling obleas, sliced fruit and grilled corn on the cob, and Calle 24, where the pedestrian-only sector starts. Looking west from the first, we must give a little credit to Gustavo Rojas Pinilla, the civil engineer- turned-Army General whose presidency gave Bogotá some large-scale infrastructure, but truncated the park, to link downtown with El Dorado airport. The Calle 26 overpass opens up a broad vista of Bogotá which is usually blocked by the buildings crammed into the city center, and a panorama framed by skyscrapers (with more bridges beyond, and afar, as the savanna edges into the Andes).

Among the former, the Colpatria Tower, on the left, stands out, as the sentinel of the Septimazo, with the further distinction of being: a) the tallest (finished*) building in Bogotá; b) a four-sided canvas of moving, illuminated murals (another resemblance to Times Square); and (c) the 980 stairs track of an annual “tower running” race, (winning time five minutes and few seconds!).

Opposite is the car park which serves as a flea market on Sundays, which sells innumerable articles, both old (golf clubs, L.p’s, coins, coffee pulping machines, military helmets, brassware, to name a few) and new (knitwear, C.d’s, posters, ceramics, jewelry, etc), plus candies, chicha and other goodies. It also features an (unrewarded) “Colombia’s got talent” contest, where skilled amateurs, armed with a microphone, belt out boleros, rancheras, tangos and pop.

Crossing the corner on the same east side of the seventh, we reach Terraza Pasteur, a halfhearted mall whose street-side steps were the hang-out of the crowd of hippy artisans, hawkers, and buskers, I was friendly with, eons ago, now gone, and replaced by others, no doubt, but the genre as such is no longer noticeable as they have merged into the scores and scores of those who hustle, sell stuff or perform on the sidewalks and roadway of the traffic-free seventh. Originally, I suppose, that was only permitted on Sunday, the “official” Septimazo, but it has since grown into a symbol of the city’s internationalization or something that is too entrenched to be stopped.

The Terraza itself is a ghostly reminder that that particular crowd has vanished. Taking a close look at the building for the first time, I noticed the oddness of its sooty, ill-proportioned columns, hollow octagonal tower and especially, its interior, once full of discos and bars for bohemians and stores selling the gear they wore, now dark and mostly abandoned, with the sinister atmosphere of a Piranesi engraving of a Roman ruin with galleries which go nowhere and a diagonal escalator in the void like a fallen beam. Even the handy locale which used to stamp mugs and tee-shirts for me has disappeared, leaving, as its only grace note, the tasty frozen yogurt sold by the Picos on the corner.

For relief, we re-cross the street and enter Colombia Linda, a San Andresito-type crafts market which (along with a nearby one) mostly caters to Colombians looking for presents when they travel abroad (or inversely, foreigners searching for souvenirs). Colorful and bright, it has the usual range of ruanas, tee-shirts, sombreros, mugs, belts, purses, dresses and so forth, including the embroidered indigenous fabrics known as molas (plain or sewn onto shirts or handbags, but warning – manufactured, not hand-made). For local consumption (which the above overlaps with), there are candles, musical instruments, hammocks, incense and punk stuff and, for Pachamamis- tas*, mambe (the packaged kind I warn against), ambil and tobacco snuff. Two stalls stand out: one, at the rear, which sells multicolor woolen sweaters, jackets and the like from Ecuador, and, another (unique, I believe), which offers aguardiente-based herbal aphrodisiacs from el Chocó.

The mansion-type building the market is in is one of several around there which are long, spacious, two-storied and have handsome stone facings. In this case, their characteristically high windows are arched on the ground floor, the whole is symmetrically arranged around a central pediment on top and there is a porte-cochere on the side for the entrance.

As for the date, I’d guess it was several decades after the 19th century turned into the 20th, a period when, but for its change of name in 1876, the Séptima was practically the same colonial Calle Real del Comercio of low plastered adobe houses with wobbly tiled roofs, shops on the ground floor and lodgings above, balconies projecting above the cobblestone road and a uniform roofline only topped by the spires of the Cathedral at its southern end.

Exiting, I was wondering where to go next when I ran into an Ingano friend whose brother created the illuminated mural of their culture which rowed* round Colpatria a few years ago. Luckily, he shares my cruel sense of humor, so when he asked me what I was doing and I said I was writing an article about unfortunate street people like himself, he instantly riposted: “If you want to see one, look in the mirror over there.” Touché.

*Originally, a stroll down the Séptima (usually, between Calle 26 and the Plaza de Bolívar). Since that stretch has become traffic-free, the open-air street fair which takes place there on Sundays.

*Rogelio Salmona, the architect who designed the Torres del Parque on the Quinta, the first complex of modern apartment buildings, with gardens, in the city.

* “Oh, the delirious confusion of the sale of the most trivial and necessary things! The seller counts his earnings in fractions of rupees and the buyer aggravates his own hunger with a handful of chick-peas or some grains of rice counted over and over again.”

*The laurels go to the: the BD Bacatá, 67 floors versus the 50 of Colpatria.

*From Pachamama, the Quechua Mother Earth: urban adulators of the indigenous.

* The mural featured their balsa canoes brightly painted there).