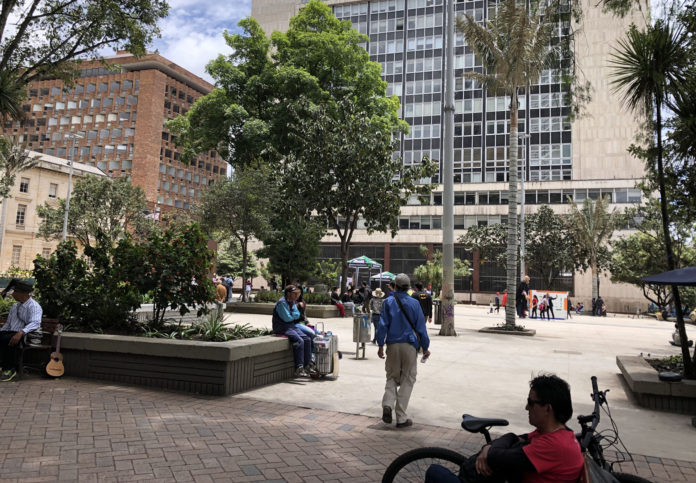 Of the two Septimazos (the Sundays’ and the rest), the former is the trademark street fair, market, promenade on the pedestrian-only stretch between Calle 26 and the Plaza de Bolívar, summarized by that handy Spanish term, a romería, for any event which draws a crowd which loves a crowd: in this case, one squashed between a narrow aisle of sidewalk displays of every kind of new, used and rip-off merchandise; fruit, candy and arepa carts, plus assorted performers. The fault (or fun) of dodging bikes, prams and dog leashes is partly the Mayoralty’s, which, after years when we pedestrians have had to squeeze between plastic-mesh fencing or walk over the rubble left by pneumatic jackhammers, has still only paved half.

For the boulevardier, the two varieties leave contrasting impressions. On Sundays, it is awe with despair at the incalculable tons of Kondo clutter left by our industrial/consumerist economy: toys, garments, sunglasses, magazines, appliances, tableware, board games, posters, L.p.’s, cassettes, hash pipes, snail slime pomades, old bottles and clock radios, ad infinitum. Here, as in the rest of Bogotá, where is so much for sale manufactured? Granted, junk like a Neolithic cellphone may be a treasure for the mechanically-minded poor, likewise an occasional second-hand hardcover classic in English for a bookworm like myself.

Nevertheless, while Sundays are great for bargain-hunting and people-watching, the real justification for the official claim of “local culture” is the entertaining live music: dancing tango singers in Gardel gear, rock, folk, Andean, ballad, etc., my point being that those musicians, whom nobody’s heard of, evidence a huge reservoir of unheralded native talent.

On the rest of the week, the waning (but not disappearance) of street stalls offers the boulevardier the opportunity to delve into the otherwise imperceptible architectural, gastronomical and historical surprises of a stretch of downtown which is apparently hum-drum and commercial.

Looking south from Calle 26 (and symbolic perhaps), the backdrop of the former Calle Real del Comercio, the Cathedral, is now blocked by a dull monolith, the Avianca building, a portent of the recent Grenfell Tower disaster (London), when a fire in 1973 gutted 30 floors (but remarkably only killed a handful), several of which, then repaired, later became the first headquarters of the Ministry of the Environment. In the foreground (right) the harsh juxtaposition of the base of the Colpatria tower and the 7-24 office block (previously the site of a multiplex) is relieved by a succession of two charming building-side murals (tropical birds, Trompe-L’œil bees).

Continuing to Calle 21, I can’t say the same of the handsomely restored, two-story late “Republican” building wrapped around the northern corner (projecting balconies, tall windows with garlands above, 1920’s or 30’s, I’d guess), since it only highlights the eyesore on the other, a Wehrmacht bunker that’s been there for decades and once ironically housed the Urban Development Institute.

Still, such sudden switches between the good, the bad and the ugly make the Bogotá I love (at times) what it is and also, to a degree, utilitarian, as when you go down the same (grimy) street and find, first, on the left (Calle Octava) a row of excellent and economical “Pacific-coast” seafood restaurants, then doubling back and down a little, el Cometa bakery/café, a traditional favorite of Bogotanos, as is the (less outstanding) San Isidro across the street.

Back on 7, the art-deco marquee of the Jorge Eliécer Gaitán Theater and inset stone carvings above hark back to the classic movie palaces of old, while the buildings opposite are anything but that, like the garish Casino Caribe in Vegas eclecticism. However, for the true connoisseur of downtown, the legendary chocolate Santafareño of the Pastelería Florida is a must. Started in 1940 in what is now the site of the nearby Arturo Calle menswear store, its eviction by the latter, its owners, alarmed every true-blue rolo until it moved to its present locale in 2002. The Personería alongside also has art-deco details.

Opposite again, the ETB offices are your standard strip window/plate glass modernism, but vastly improved since the good old days when you had to wait in line for an hour in the basement to report a problem. With its giant t.v. screens, sofas and display of antique phones, its customer service area is a convenient place to kill time if you’re short of the spare change for a tinto. If not, you can have your portrait drawn on the sidewalk there.

Alongside is the little plaza with a bust of the astronomer/martyr Caldas, where the dramatic apex/corner of the ETB is spoiled by the clashing styles, scales and materials of the rest (e.g. a fleabag hotel, a red/white Claro sign). The all-night taxi-drivers coffee stall at the bottom I patronized 40 years ago is gone, but the fish stores and restaurants in and around the Nieves marketplace are still thriving.

Opposite once more, I am dizzied by its namesake, one of the oddest churches in town, a red-and-white, vaguely Byzantine riot of mismatched arches, towers and stonework, with a cruciform hollow with a clock and superfluous columns on the left tower and an outsized oculus framing a statue of the Virgin.

Crossing the Calle 19, we squint at the bulging pyramids of dirty plastic which wall in the VidaNova shopping center, pass some chain stores (a Panamericana, a Reebok/Adidas in brutalist black) and reach another treasure, the Casa Lis on the corner of Calle 17, which in my early days (and right up to the recent advent of gourmet marts in the North) was the Harrod’s Food Hall of Bogotá. That is still apparent in the westernmost section’s display of fine foods, wines, cigars, chocolates and tinned delicacies but there is more to the Lis than meets the eye there. On the ground floor: an old-fashioned giant copper coffee machine with an eagle on top which supplies the little café there (which doubles as a bar); one counter of nuts, raisins and sweets; and another where you order the sandwich you want from the salamis and hams on the hooks behind. On the three floors above: a fish, grilled meat and veggie restaurant, respectively; and at the back, practically hidden, a tiny supermarket with a salad bar.

Across the street, the lobby of the Edificio Colseguros reminds me of the golden age when the very architecture of banks and insurance companies was a warranty: marbled floors, walls and reception desk; flanking staircases, a crystal chandelier and an elevator with a moving arrow floor-indicator (instead of a soulless LED), with due respect for Colombian eccentricity, however, when you turn left at the same, to the Balzac second-hand bookstore in the basement.

We then reach the Parque Santander, whose tall palms and Urapanes would make it an oasis in a desert of cement if it weren’t for the throng of hawkers, buskers, soap-box orators and not least, tourists, because the Park, with its surroundings, is the cultural/historical heart of the Séptima, if not the nation, since it announces some of its main themes, as it were. Gold, of course, at the eponymous museum. The marked multiplication of foreign visitors since I last visited it, many years ago, is proof in itself that the “image” of Colombia has been laundered, to an extent. But in this case, I won’t pay the price, remembering how we were rushed from one gallery to the next so fast there was no chance to examine the exhibits at leisure and when I tried, I was treated with suspicion by the guards. The old seat of the Jockey Club (like its nearby peer, the Gun Club, more below) is a testimony to the days when the country was run by a tiny elite of Anglophile arrivistes and snobs who now live and work in the North and have taken their haunts with them.

We right-angle to the owners of all that loot, the Banco de la República (Central Bank), which far outdoes the splendor of Colseguros, though to get a real idea, you have to ascend from the monumental hall which serves the public to the offices of the governors on the upper floors, which are so spacious and rich in wooden paneling, deep carpets and the like even Alan Greenspan would be envious.

Exiting, we stand at what I think of as the most redolent intersection in Colombia. On the northwest corner, flanked by the nearly oldest colonial church (San Francisco), the former seat of the Governor of Cundinamarca (where one presided over my naturalization ceremony), the Palacio de San Francisco (built around WWI), a regurgitation of the third-hand classicism ingested over the previous century, heavy with capital, pediment, allegory and, within, a stairway that typically leaves room for little else. On the southeast one, the ex-offices of El Tiempo, the country’s biggest daily newspaper (and nursery of several of its presidents and other big shots). And, on the southwest, the sidewalk where Liberal leader Jorge Eliécer Gaitán was assassinated in 1948, signaled by a plaque which also (if indirectly) commemorates the start of the forced modernization of the 7th after the whole sector was wrecked by the riots his murder provoked. Here, we can add another emblem to gold, oligarchy, religion (and mayhem) – emeralds – though, the last time I looked, the age-old street bourse of wise guys from Boyacá seemed to have shifted a block or two.

Having run out of space (and steam), we skip the stretch between the Jiménez and the Plaza de Bolívar (though the sector which makes, repairs and sells jewelry which hits it from above around the 12th is worth a mention) and go down the alley alongside the church for a refreshing cup of coffee at the Arte y Pasión Café, located on the premises of the abovementioned Gun Club, which, in contrast with its fairly restrained colleague, is an exaggerated version of the Santa Fe pompier style of ponderous pillars, balustrades and arched window-doors that roughly dates back to the first half of the previous century, though it is somewhat compensated for by the sky-high courtyard within.

The subtitle of the café – Escuela de Baristas – may or may not warn you of the difficulty of choosing one of the many different methods, all excellent, of preparing coffee with gadgets which range from Victorian glass flasks (heated at your table and on sale there) to filters, socks, siphons, mokas, grecas, percolators, espresso machines and what have you. Why you are forbidden photos I don’t know, but since Colombia is not only “passion” (or gold, emeralds and the rest) but coffee as well, this too is a must.