Caño Cristales gets all the credit in travel guides for having the most magnificent, multi-colored river in Colombia. While international praise is welcome of a natural wonder flowing through La Macarena’s rock massif, a different river with a more limited color palette has also been making a splash with tourists exploring the backwaters of Santander.

Travelers heading south of the department tend to skirt past Oiba, a small town nestled among cornfields, and where cascading waterfalls are just one of many natural attractions. With its reputation as the “Manger of Colombia,” buses connecting the capital Bogotá with Socorro, pass through Oiba, the gateway to Comunera province.

A 30-minute drive along a half-paved, half dirt road (serviced by micro-buses and 4x4s) is part of the adventure before one reaches Guadalupe, a town that could serve as a prototype for so many others in this coffee-growing region, beginning with the palm-lined central square (68 wax palms in total claim the locals) to slanting red tile roofs and a watering hole blaring Mexican rancheras from loudspeakers.

The voice of Vicente Fernández from the Sinaloa Bar sets the tone for a morning in a rural community with an inclination for all things Mexican, including the architecture of the town’s main attraction – the Cathedral of Nuestra Virgen de Guadalupe. As we pull up at the base of the stone steps leading to the Cathedral’s stone entrance, a small plaque reminds visitors of the historical connection of this territory to Simón Bolivar. The Liberator arrived in Guadalupe in 1818 to recruit patriots for the Independence campaign.

The centerpiece of the Cathedral is a replica of the famous image of the Virgin that hangs in the Basilica in Mexico City and donated to this community by the government of Mexico. In 2012, given the special religious connection between Guadalupe, Santander, and one of the most visited pilgrimage sites in the world for Catholics, Pope Benedict XVI authorized the small town declared a Diocesan Sanctuary.

After admiring the Tree of Freedom, planted more than a century ago in the main square, and a visit to the colonial Casa de la Cultura, most tourists hit the road again to reach La Quebrada de las Gachas or the “Caño Cristales of Santander.”

A constant flow of backpackers shows foreigners have discovered a river with 200 circular plunge pools, and during our 20-minute walk from the main road that leads to the rock bed, we come across Australians, Britons, and a group of American teachers visiting from Barranquilla.

Unlike Caño Cristales where the algae can disappear from one season to the next as a result of either a dry summer or very wet winter, Las Gachas stays red all year round given the mineral composition of the rock and sand. But, the fact that it flows through someone’s backyard means one has to pay $1,000 pesos to a local farmer in order to enjoy these natural jacuzzis, where one should only walk between the wells with socks, so as to not erode the micro plankton that sheathes the rock converting it into an living toboggan.

On weekends Las Gachas becomes popular with locals, letting the children slide from one pool to another. Lighting a bonfire for a barbecue is strictly forbidden, and enforced by these Santandereanos.

Many tourists decide to spend the night near Las Gachas so as to not return to Guadalupe or Oiba with wet bathing suits. The recently inaugurated Hotel Terrazas de Guadalupe is closest to the rock formation and counts with its own sparkling pool. The hotel also offers visitors to the region a pleasant restaurant with traditional food, and for hikers, a place to wash-up before the 45-minute trek back to the Guadalupe.

The Comunera province is a newcomer to Colombia’s expanding tourism portfolio, and Guadalupe’s rainbow river is a budget-conscious option for visitors in search of hot weather, without having to deal with the all-terrain adventure of reaching La Macarena in the Eastern Plains. 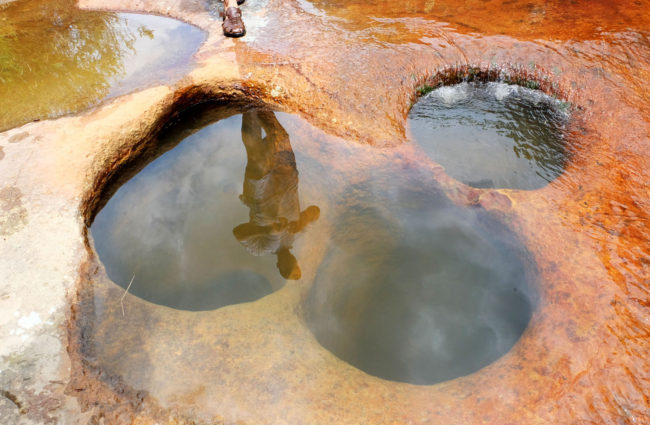