In an unprecedented move to guarantee the safety of students, the Mayor of Medellín Daniel Quintero has authorized security forces, including the National Police’s anti-riot squad (Esmad), to enter educational institutions when explosives are used by protesters.

in a written statement released by Quintero, the decision is based on his “Constitutional duty to ensure the safety of all citizens […] and the entire university community.” According to the 39-year politician, who took office on January 1, 2020, security forces can “regain control” of universities once students who are not participating are evacuated. The measure includes the authorized entry of anti-explosives teams.

Announced just days before the start of the Armed Strike by the National Liberation Army (ELN) guerrilla on Thursday, February 14, and rash of vandalism during the mass protests of the Paro Nacional, the decision to allow security forces to enter educational institutions is a final recourse “if all possibilities of reaching a negotiation end.”

Even though Colombia’s security forces are allowed to enter the premises of all universities and colleges, the understanding between authorities and representatives of the education sector is to preserve the integrity and independence of academic campuses, despite many protests in which improvised explosives have endangered the lives of police officers and bystanders. 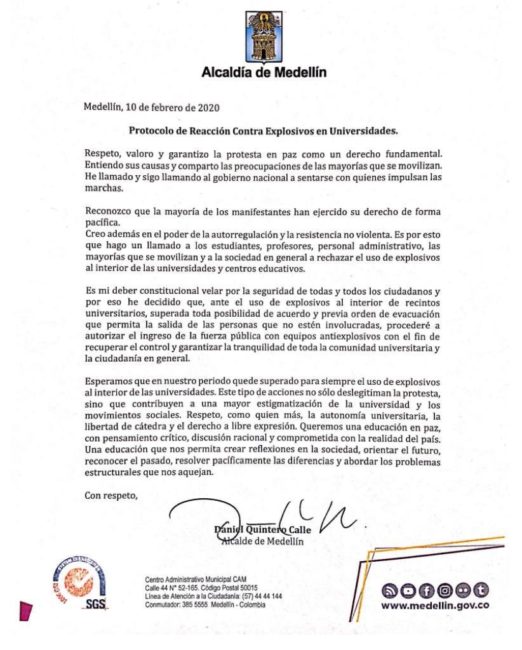 For many rectors, the reasoning of keeping authorities at the gates of their facilities mitigates the potential for larger confrontations inside, which can put at risk visitors, as well as invaluable research documentation.

On Wednesday morning, Quintero coordinated from the Unified Command Post in Medellín police controls as different student protests are taking place inside the National University, Jaime Isaza Cadavid Polytechnic and University of Antioquia. Quintero called on students to conduct “their day in peace and coexistence” as the new protocols were being enacted. My mid-morning students were being evacuated from Universidad de Antioquia as masked protesters – encapuchados– were handling potato bombs.