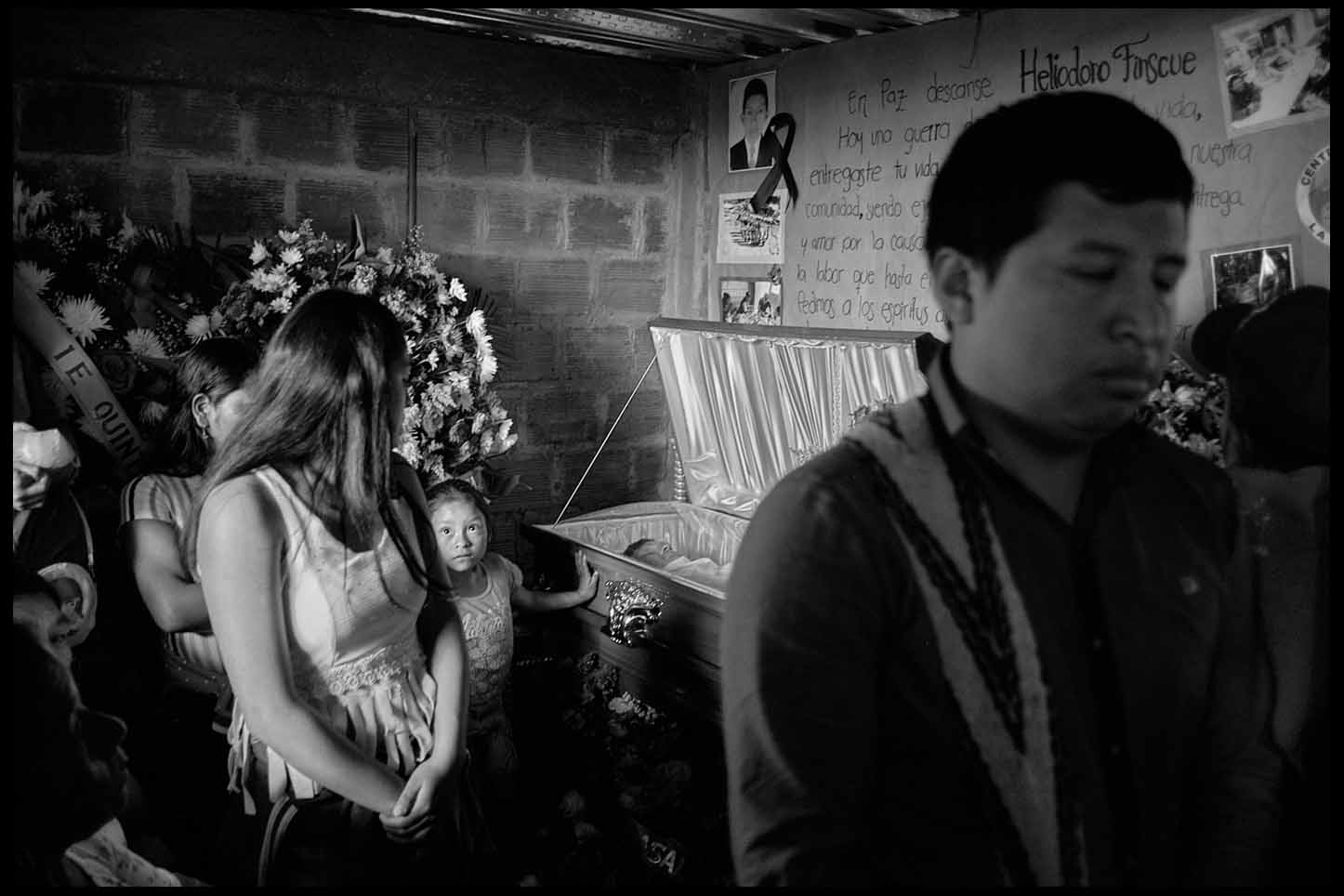 Famed for its stunning colonial architecture, gold deposits, and mist-shrouded mountains, Cauca has gained a new, sinister distinction in the last three years as the department with the most killings of community leaders, the latest a 42-year-old indigenous governor named Cristina Bautista, murdered in late October along with four of her bodyguards outside the village of Tacueyo. 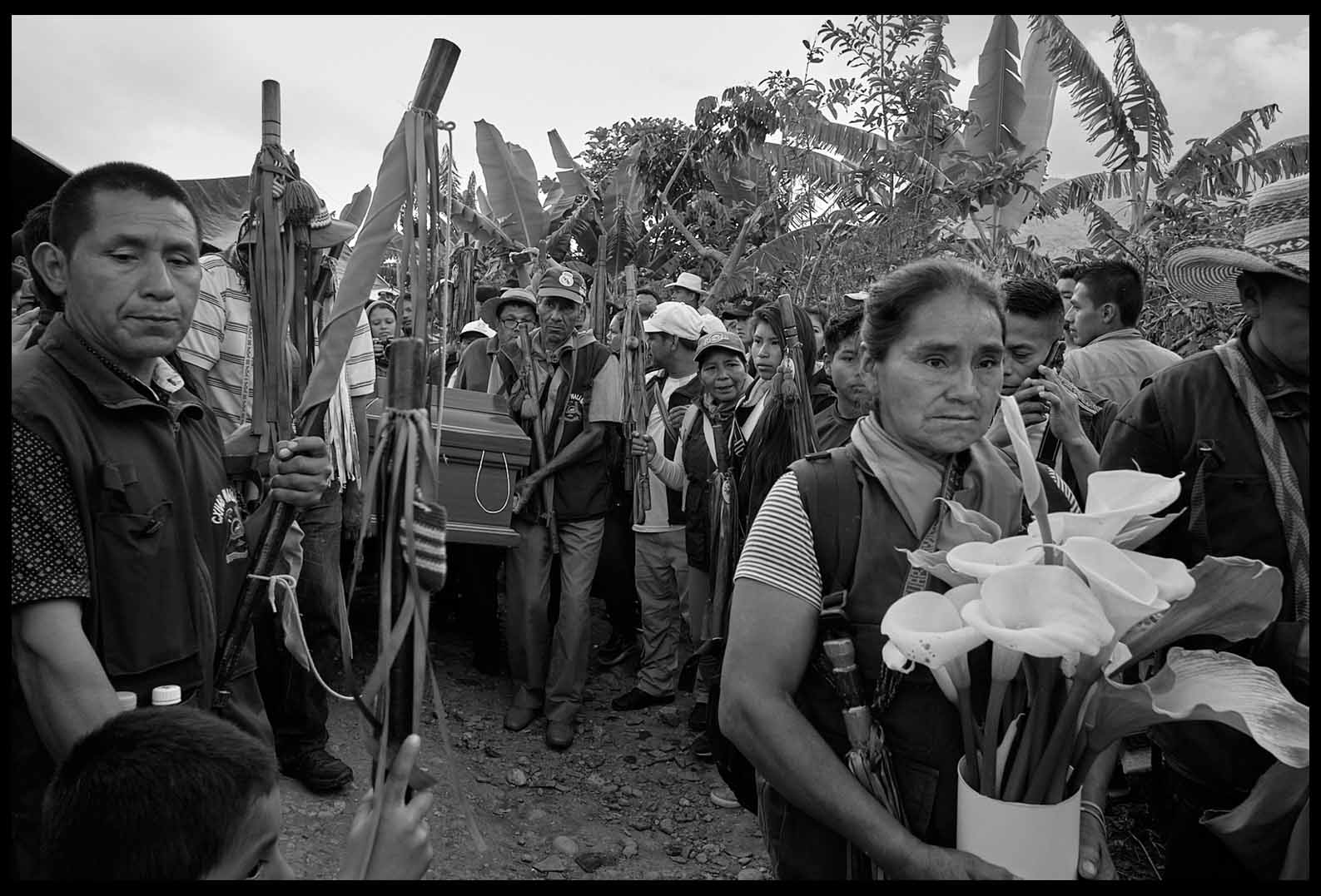 The killings are one reason why Colombia’s indigenous groups have staged protest marches in Bogotá and have repeatedly blocked the Pan-American highway north of Popayán. Several thousand of them converged there for four hours on November 21 at the start of the national strike in a mood that remained festive throughout, with no intervention from the police. But this year alone, the UN has documented the murder of 52 indigenous people in Cauca, the majority of them members of the Nasa. 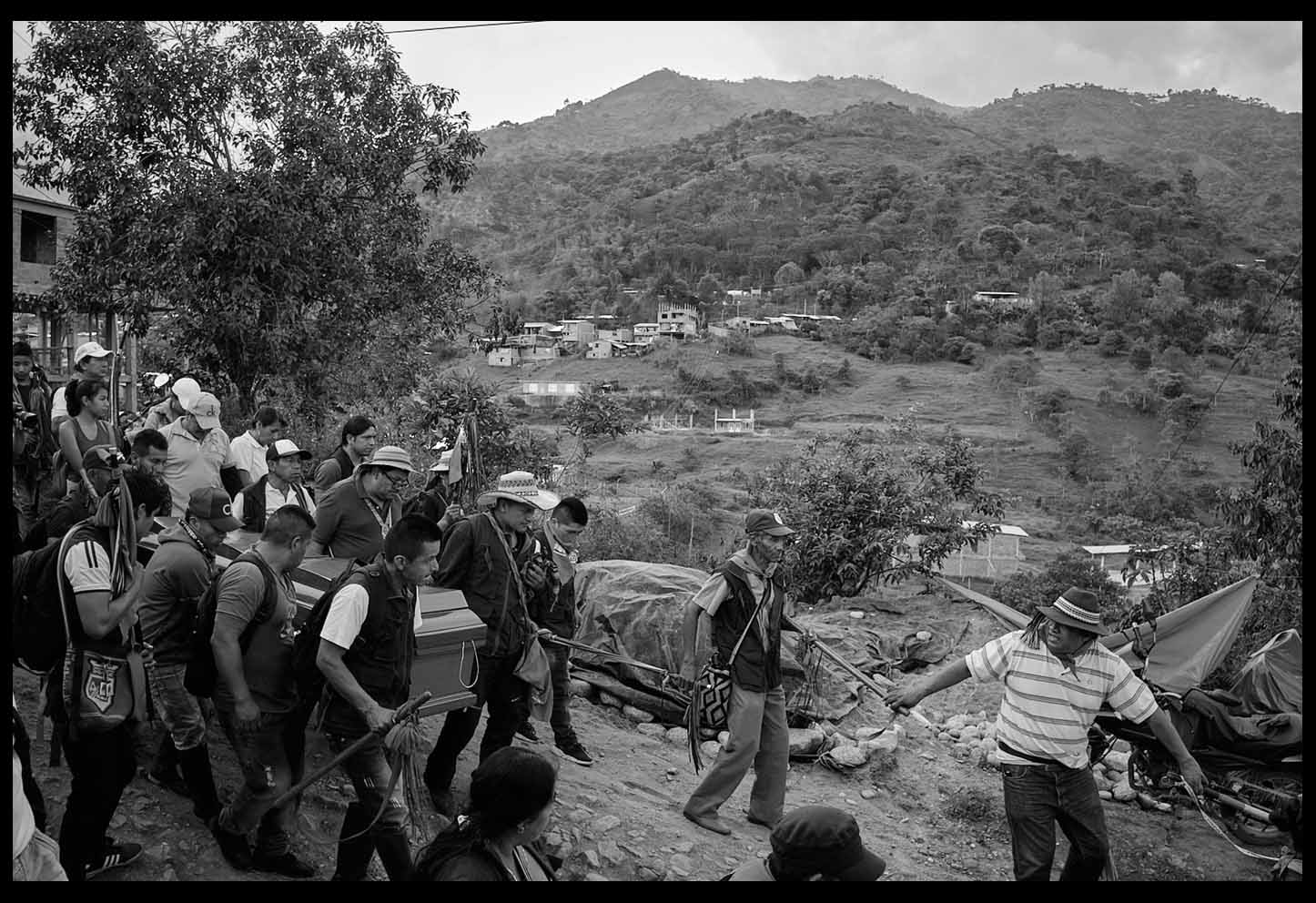 Government officials attributed the killing of Bautista and her guards to a dissident faction of the Revolutionary Armed Forces of Colombia (FARC) guerrilla, but locals in Tacueyo blamed paramilitary gangs who protect the area’s burgeoning marijuana plantations. In recent years Nasa leaders have tried to stop the spread of marijuana cultivation on their reserves, provoking a violent response from growers who stand to lose out. After FARC demobilized in 2017 with the signing of the peace accord, dissident armed groups have been seizing control of lucrative drug routes that connect Putumayo in Eastern Colombia with ports on the country’s Pacific coast. 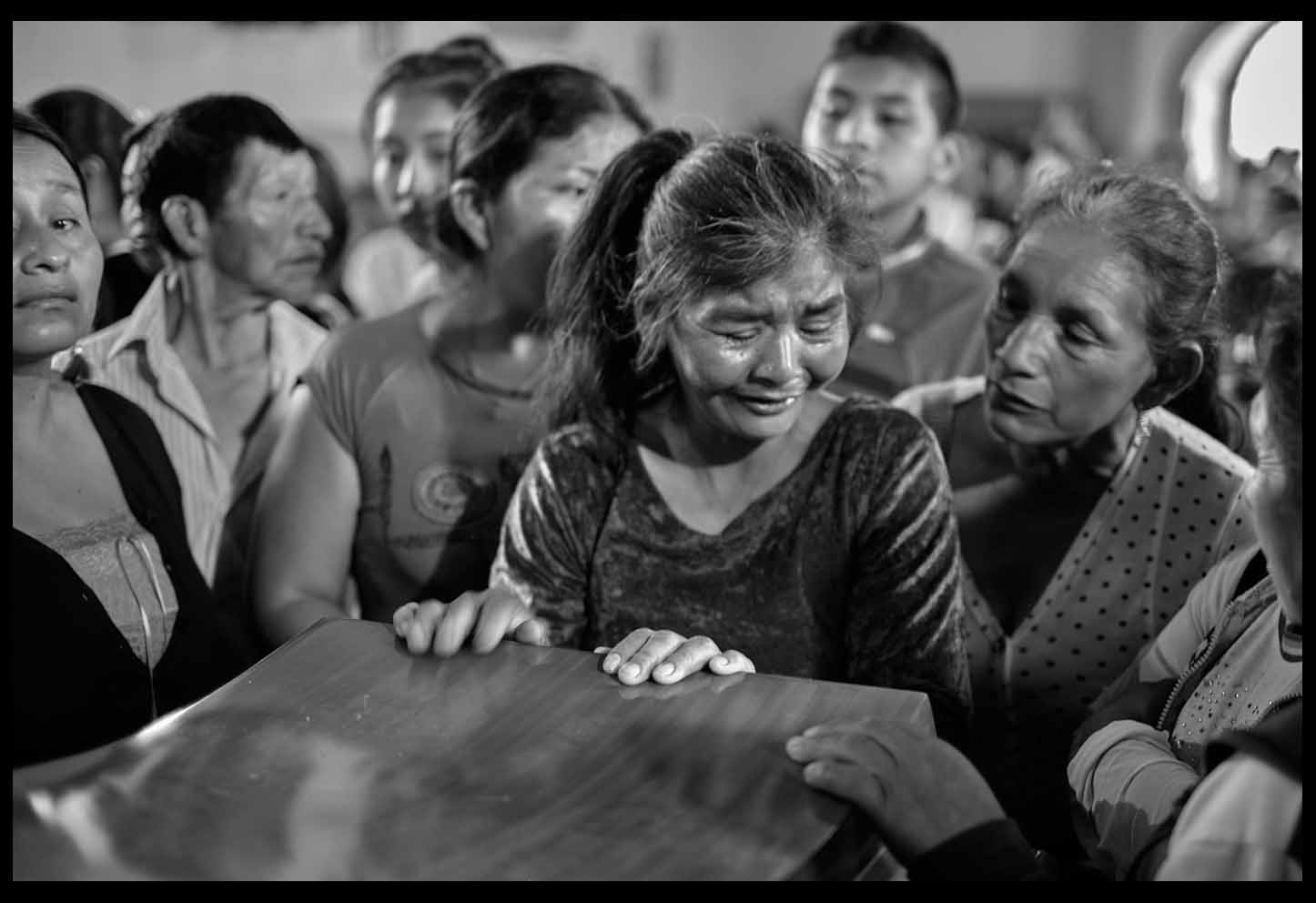 The Nasa confront has followed a code of non-violent resistance that can be as suicidal as it is heroic. The Nasa defense force, which included the guards who died with Bautista, consists of volunteers carrying tasseled staffs that are symbolic of their authority but no match for firearms. 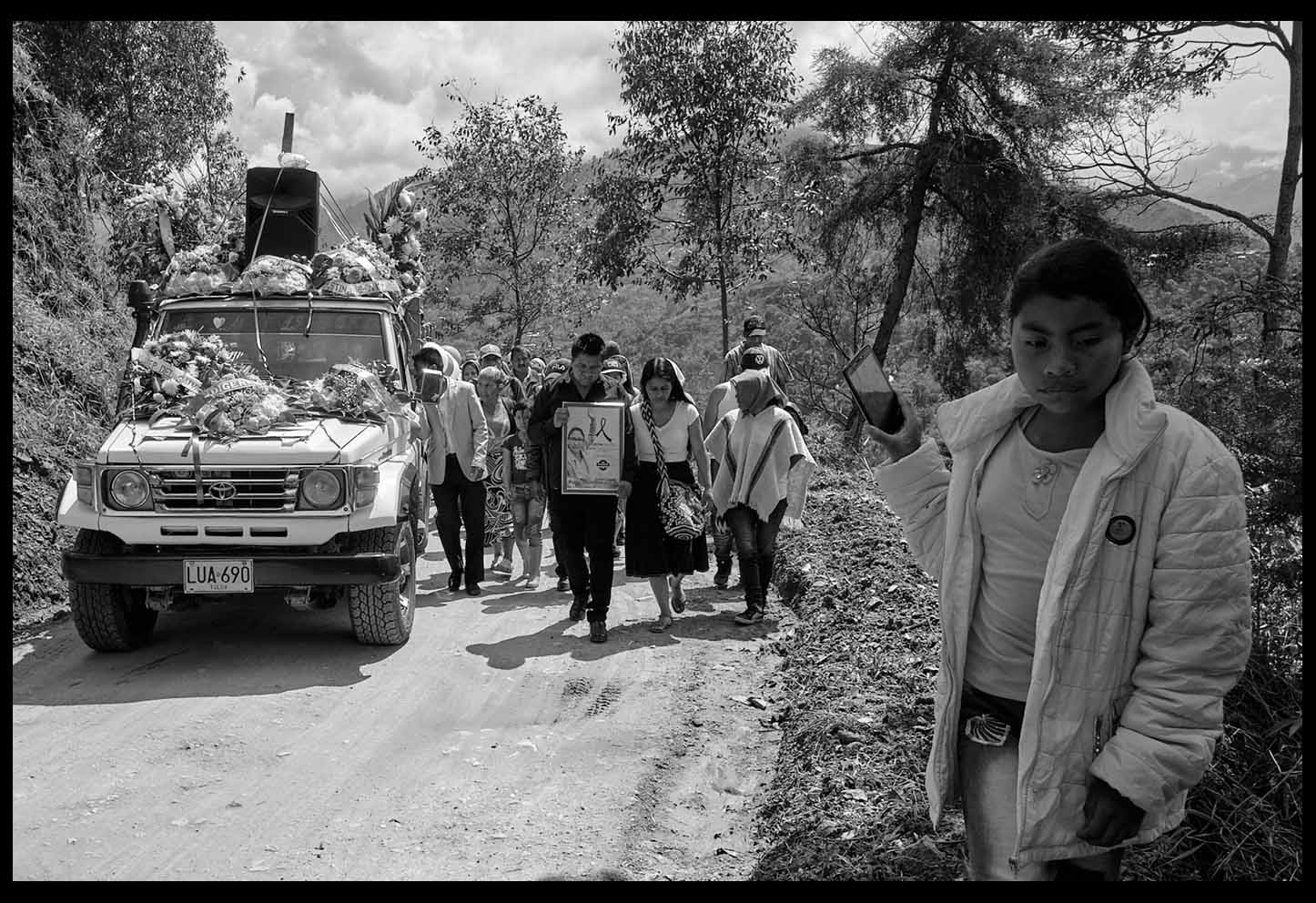 While drug gangs are the likely perpetrators of the recent killings, indigenous groups see the state as complicit in the violence. People in Tacueyo question how the gunmen’s car was able to pass an Army checkpoint before and after the attack without being stopped.

The National Indigenous Organization of Colombia (ONIC) has repeatedly criticized the government’s failure to implement a crop substitution program laid out in the 2016 peace accords with FARC that would reduce plantations of marijuana, coca and opium poppies on their ancestral land. 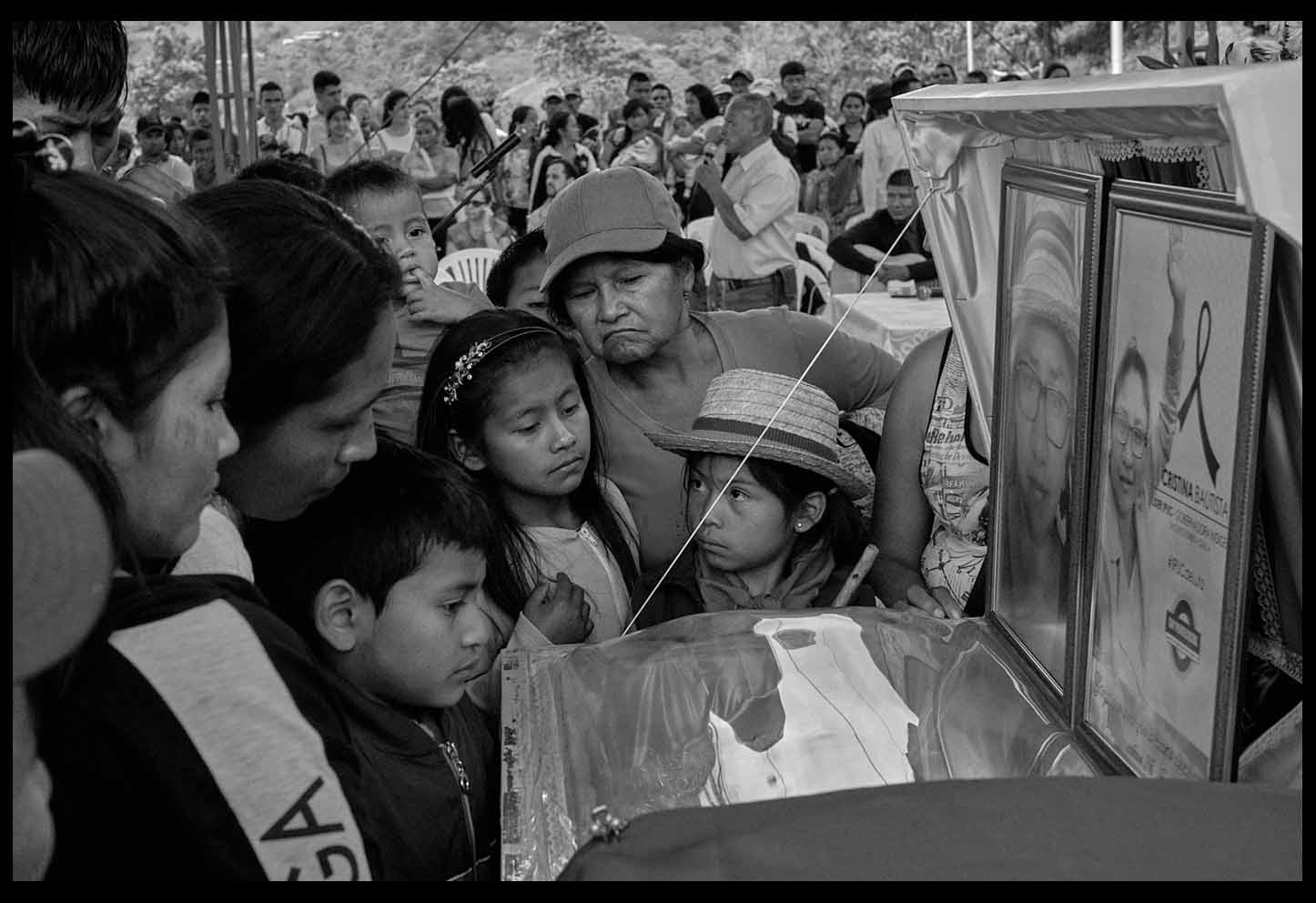 Nasa leaders have insisted that the Army’s presence in their territory contributes to the violence and that President Ivan Duque’s deployment of 2,400 soldiers to the area in response to the Tacueyo shootings will only intensify the conflict. President Duque has pledged to send more troops to Cauca to combat FARC dissident groups. 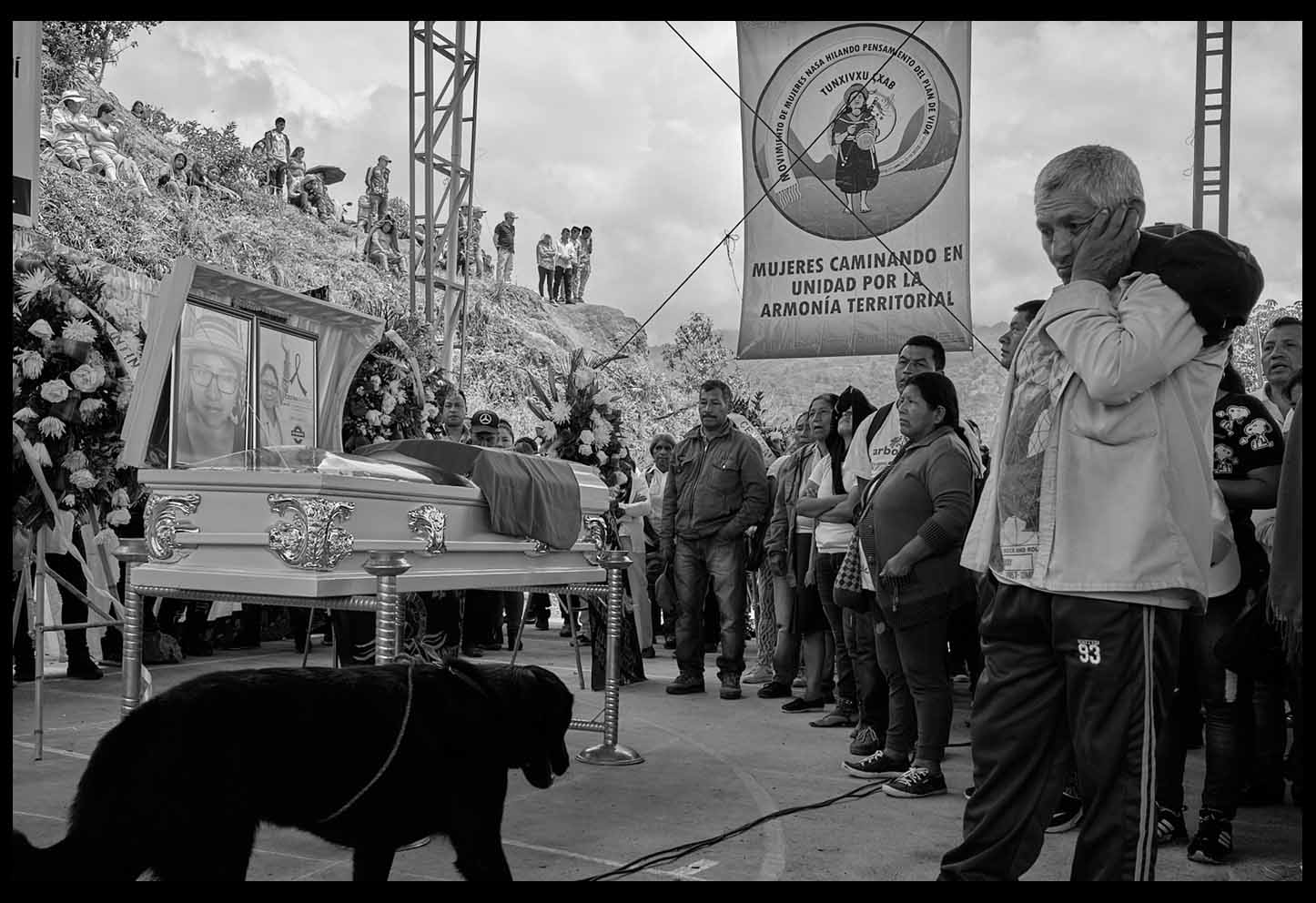 Nasa people say privately the government is content to tolerate the violence because it sees them as an obstacle to economic development based on mining, logging and hydroelectric projects. At Bautista’s funeral in the village of La Susana over the mountain from Tacueyo speakers repeatedly praised her role as a leader in the Nasa’s campaign to assert their constitutional rights and repossess lands granted to them in the colonial era but signed over to outsiders by successive governments. 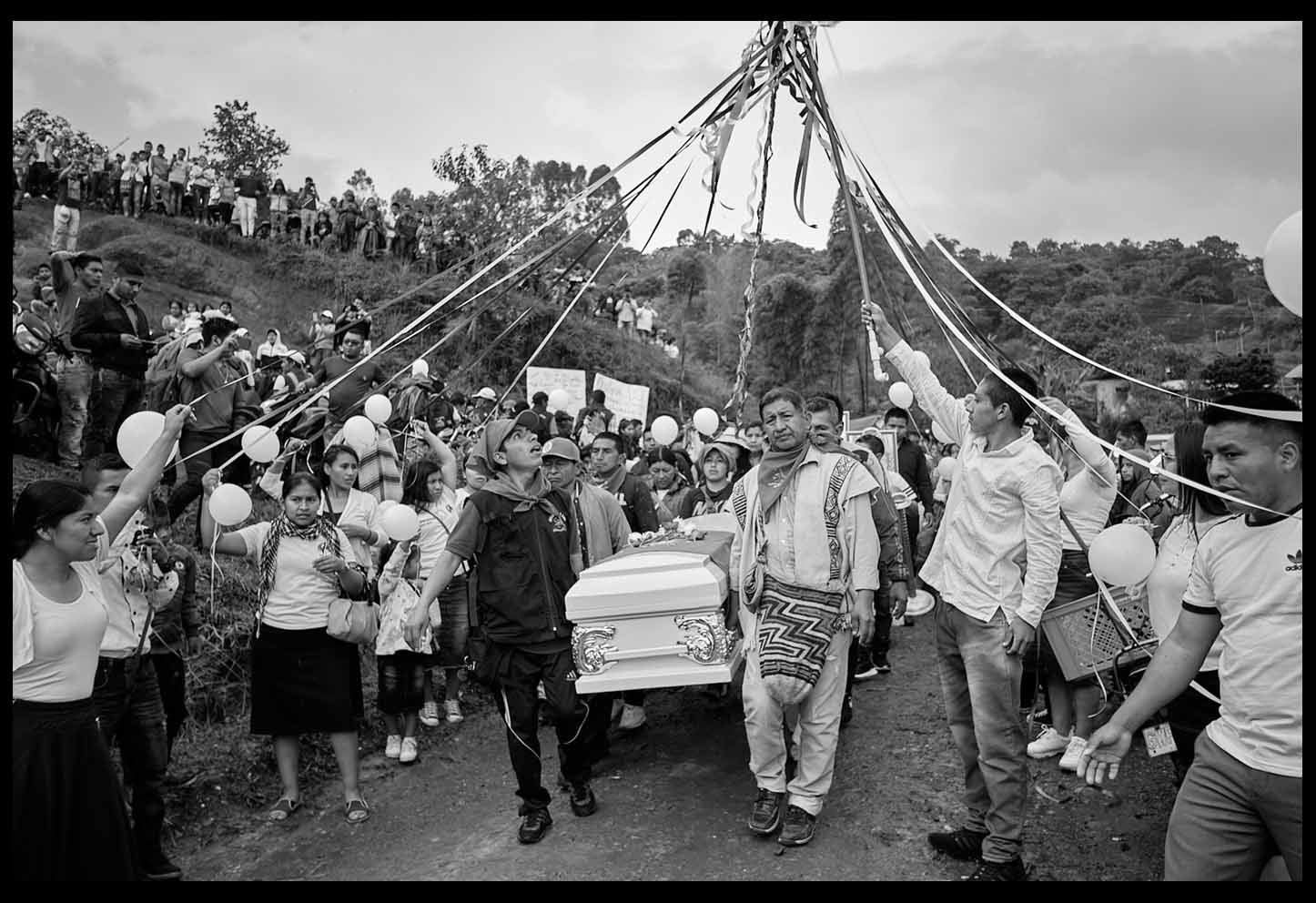 More than a thousand people gathered under La Susana’s stadium roof to pay their respects, including politicians from Bogotá, UN representatives and preachers from Bautista’s evangelical church. 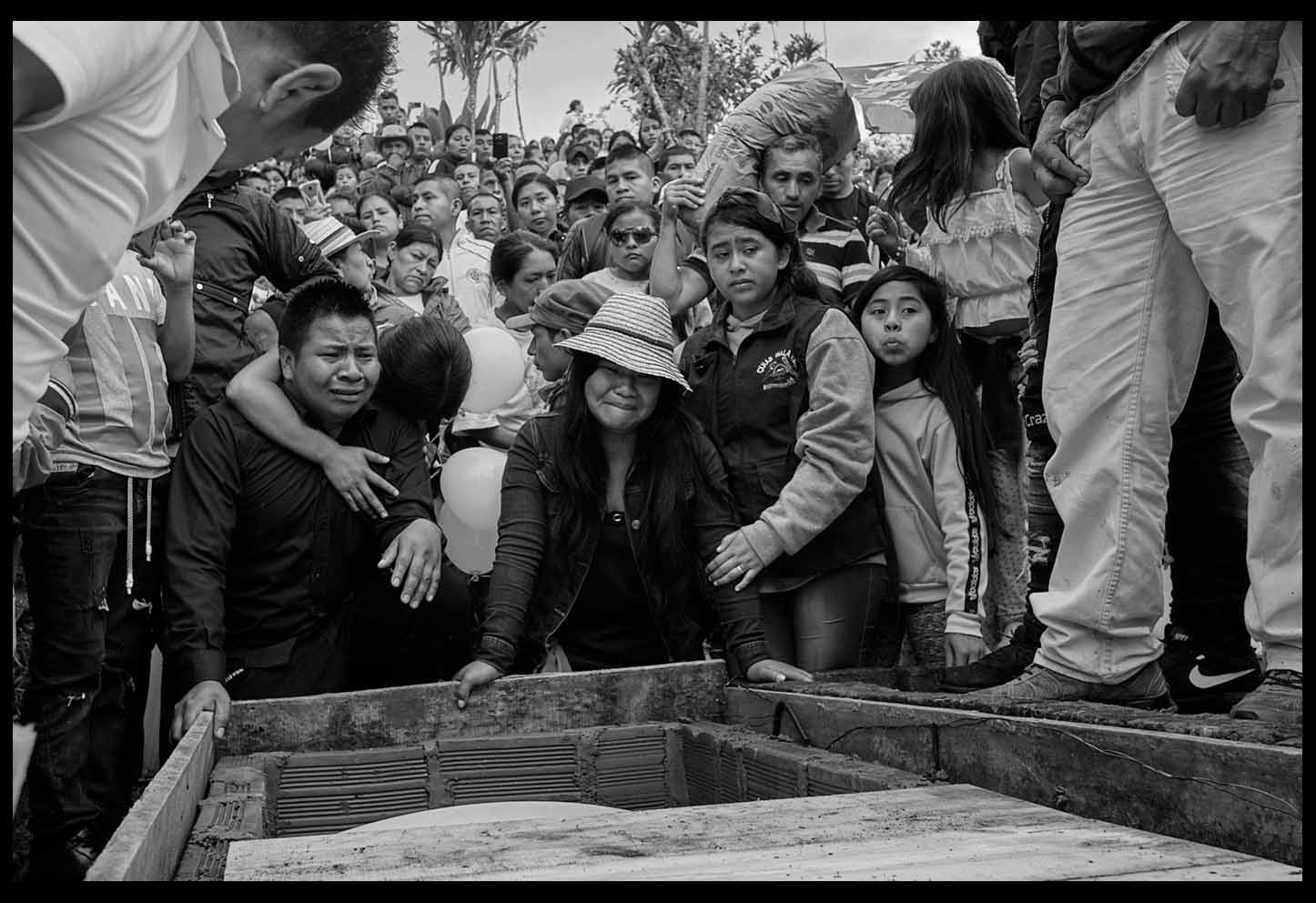 For most of the occasion, like the funerals of Bautista’s guards the day before, was a strikingly personal farewell by her Nasa community. Locals took their time to stare into her coffin as if she were their sister, daughter or parent. After the burial, her family sat talking quietly on a raised grave. A small girl in a white dress ran back and forth, apparently unaware of the growing wave of killings that had brought her there. 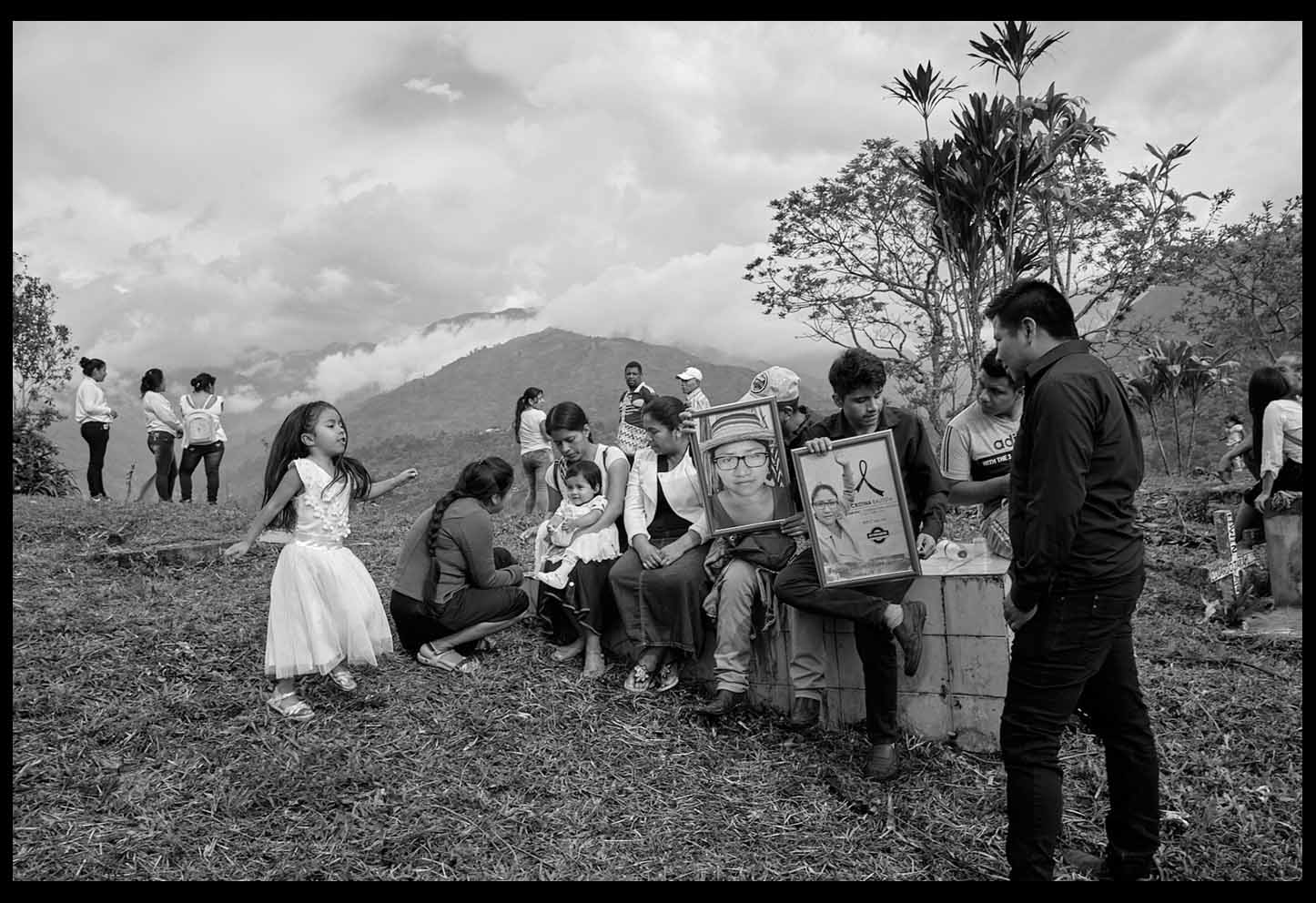 Photography and text by Malcolm Linton My name is ‘Chocó’