Photographers communicate through images, sparing on words to let their subjects express emotions, sense of style and inner beauty. In the crowded, fast-changing world of photography, there are a handful of names that have defined the way we see fashion, and whose pictures are admired as an expression, and experience, or the most artful and glamorous.

Considered among the very best editorial photographers in the world, Ruven Afanador did not measure his words when professing his love of Colombia’s landscapes, and the spirit of adventure that marked his latest visual project: Hijas del Agua (Daughters of Water) in collaboration with Bogotá artist Ana González, and that was exhibited for more than a month in the hallowed walls of the capital’s Museo Santa Clara.

The artistic undertaking is presented as a series, in which Afanador immaculately captures the grace and natural expressions of women from four indigenous groups across Colombia. After the pictures were printed in large formats, they were then intervened with texts, delicate embroidery and tribe-specific iconography by González.

Capturing the essence of these women who inhabit rural Colombia with Afanador’s elegant aesthetic, and the intimacy in which González interprets the cosmogony of ancestral wisdom in her intricate designs has elevated the narrative of how culture and identity are represented in art. Visitors to this former 17th-century convent will be spellbound, not only by Afanador’s eloquent portraits – each a universe unto itself – but the historical context in which they are shown.

Daughters of Water took a year in the making after Afanador and González were invited by former First Lady María Clemencia Rodríguez de Santos to partake in a project with the objective to leave a visual record for future generations of indigenous peoples that are indelibly connected to their ancestral traditions while facing the reality of this country’s post-conflict.

For Afanador, to document indigenous communities was the opportunity of a lifetime. Covering territories in the north of the country starting with the Arhuaco, in the Sierra Nevada de Santa Marta, and Wayúu, in La Guajira, to the Kuna Dule, along the western Pacific coast, and Misak, in the southern department of Cauca, was a homecoming of sorts.

“I felt an immediate desire to know about ancestral Colombia. I didn’t have a connection to rural Colombia, either, before or after the peace process. But, I had always dreamed of traveling to such legendary and hidden places,” remarks the 59-year old photographer who was born in Bucaramanga, but left age 14 when his parents moved to Michigan. Even though his parents never returned, Afanador is considered a Colombian photographer working overseas, despite four decades in the United States, where he established a career shooting for the most prestigious magazines in fashion, including Vogue, The New York Times magazine, Esquire, among others.

“I have to admit that to have been able to do this project and have this experience, it was necessary for the country to enter a period of post-conflict,” remarks the photographer during the inauguration of the exhibition on August 3, and four days before President Juan Manuel Santos’ term ended.

From his iconic and intensely romantic images of bullfighters to stark portraits of Hollywood actors, as well as editorial features that convey a classic approach to reportage, Afanador has not remained absent from the people and events that have shaped his native country during the last two decades.

A portrait taken in 1992 of Gabriel García Márquez in a typical ruana shows how Afanador earned his own celebrity status by getting the enigmatic Nobel Laureate in Literature to pose before a camera, an accomplishment very few achieved. During the late 1990s, Afanador’s Manhattan studio was also a reference for many exiled artists who believed that by having their photograph taken by this soft-spoken Colombian, their accomplishments – no matter how limited – would be immortalized.

And a powerful portrait in 2009 of the then recently liberated Ingrid Betancourt after six years of captivity in the hands of the FARC guerrilla, clasping a rosary and leather-bound Bible shows Afanador’s honest and magnified view of political realities from afar.

When the artist turned up in Bogotá last month for the opening ceremony of Daughters of Water, the cloister was abuzz with anticipation. Afanador had returned to Colombia, and what was the maestro going to reveal in a space reserved for painters of the Renaissance? 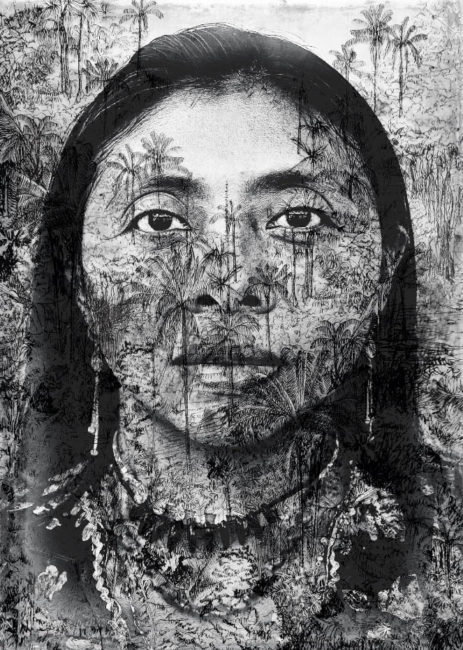 Daughters of Water crystallizes the indigenous belief that water is the giver of all life, at the heart of creation and essence of our existence on earth. While the faces of the women tell of a life in the countryside and their spiritual connection to nature, as a series, it’s a visual testament of climate change, how deforestation is a constant threat to ancestral territories, and the role of women as guardians of sacred knowledge.

“When we were offered the Santa Clara Museum as our exhibition space, it caught our attention, as this former convent of Clarissian nuns in colonial times, referenced what many women in indigenous communities face today – enclosure and isolation from contemporary societies,” says González. The union of the museum’s gold leaf walls and cramped religious iconography strikes up a dialogue with the indigenous, questioning what is held as sacred and profane. For González, who studied architecture at Los Andes University before taking up Art and Gender studies at Trinity College, Dublin, the exhibition also shows how artists, from two different disciplines, can come up with a project that speaks a universal language.

“After seeing two or three of Ruven’s photographs, we came to the conclusion that it was very nice to do something together. The idea was to make a book of the “secret Colombia,” but as the finished result was so powerful, the most organic step forward was an exhibition,” explained González.

While Afanador and González have mastered their respective disciplines, and work in environments removed from that “secret Colombia,” the process of forging a creative venture entailed traveling to regions where planning was near to impossible, and as the photographer states: “distances were magnified by interminable horizons.”

While Ruven claims that the photographic process was the same, whether capturing a celebrity or an indigenous person with his camera, the rewarding aspect of each day was in the “mystery” of not knowing how long he and González would stay in one community, before moving on the next.

Afanador’s large-scale prints are the end result of elaborate digital processes and printing techniques. However, with the intervention by González of a dozen portraits, the process took longer than usual recalling the age of film photography, in which every element, from grain density to paper quality, had to be controlled.

For González, the project was equally intuitive, with each artist adding layers, experience, and insight. “It was a way of expressing our feminine side, and the energy between us was very beautiful. At times we didn’t even have to speak, because we understood where we were coming from,” she explained.

Apart for his back-to-back globe-trotting agenda as an international photographer, Afanador takes on long-term projects, such as his Torero series that resulted in a hardcover book with the same title in 2001. “I wasn’t looking for a long-term project in Colombia, but I had it in the back of my mind,” remarks the photographer. “And working with Ana was much more than I could ever expect. It was incredible.” Both artists agree that Daughters of Water is their most important project to date, and what audiences saw in the Santa Clara Museum, is the prologue of a creative venture that will include other indigenous communities in the country.

The women who sat for Afanador may not fully grasp the importance of their moment in front of a lens, but their natural sense of style, as well as the accessories that are part of Colombia’s rich and varied arts and crafts landscape, will catch the attention of fashion editors, as Afanador plans to show this collaborative series to the most influential in the industry. “If I could dress like a Mamo (spiritual elder of the Arhuacho tribe) every day, I would. It is so sexy, and their style, universal.”

For González, Daughters of Water redefines “the imaginary of a nation linked to so much violence, and where beauty and dignity of peoples are not represented as they should be, in art.” 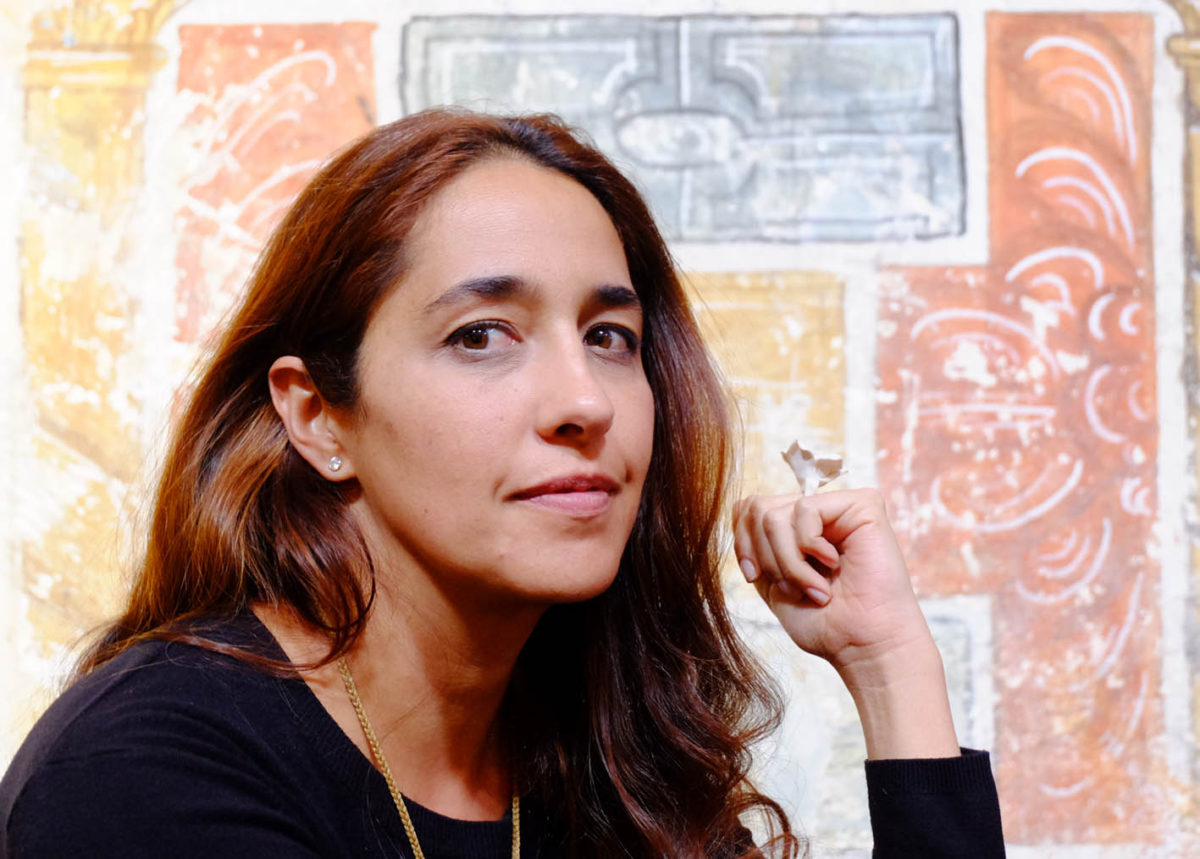