If we were to tell you that “coke” is openly sold in Bogotá, you would probably say “so what” (thinking of Coca-Cola) or for the more cynical: “What do you expect of a cocaine republic.”

In fact, we are speaking of coca, once a minuscule ingredient of Coca-Cola, but specifically referencing the traditional use of that jungle plant as a ceremonial aid to sound health, right thought and right conduct, in the form of mambe, an ultra-fine, vivid green powder. “The softest substance he’s ever touched” remarked anthropologist Michael Taussig of a substance made from toasted coca leaves and mixed with the ash of the burnt leaves of the yarumo tree. When slowly absorbed through the mucus lining of the mouth – not swallowed – it produces wakefulness a slight numbness in the gums and a damping of appetite.

The nutty/sweet mambe is complemented by a bitter, black tobacco paste known as ambil, which also contains vegetal salts (usually from the ash of a burnt palm trunk) which are rich in health-giving minerals. Like other forms of tobacco (wrongly maligned when it is natural), ambil sharpens one’s concentration and short-term memory and intensifies the most notable property of mambe, a subtle “high”, the use or abuse of which is our subject.

For the indigenous communities who prepare mambe, principally the Huitotos of the Amazon (who call it jíibie) coca is a sacred plant, mainly used in a ritual context with the aim of clarifying awareness in order to harmonize man with man and men with Nature and the cosmos. The medicine is therefore comparable to the better-known ayahuasca (or yajé), but it is exempt of the latter’s visionary, purgative and traumatic effects: I would liken it to ingesting pure chlorophyll! The effect is gentle and meditative, and instead of an unsettling and sometimes violent confrontation with other-worlds, the ritual takes the form of a sort of Platonic dialogue among the participants, led by an elder who is part-healer, part myth-teller and part arbitrator of disputes.

The start of the urban school of ayahuasca roughly dates back to the early 1990’s, when a few adventurous taitas (the name of healers) first held sessions in Bogotá, with the sponsorship of anthropologists who had visited their communities and limited the access to them, to their colleagues and most trusted friends. Inevitably, however, outsiders crashed the party and from a slow start, ayahuasca has since become available to people from all over the industrialized world – not only New Agers, but rock stars, socialites and filmmakers.

While up to now, the use of mambe has mostly been limited to a few White pachamamistas* in Bogotá, it is now starting along the same imperiled path: from a secret to revelation, to therapy, to …business, losing most of its magic along the way. And witnessed in the cigar-store Indians who hawk ayahuasca to unwary tourists in Iquitos (a commerce which the Peruvian government promotes as a dollar-earner!). But whether it happens there, or when the same farceurs visit Europe, the medicine itself is a powerful purgative of bodily ailments and a self-psychoanalyst, so for better or worse, the ceremony is a psychodrama, a galvanic “life experience” for lives which are usually dull.

My point is to draw a contrast between the two. The former entails a collective therapy, structured and led by a guide, whereas a Westerner can take the latter as a recreational drug the fearsome ayahuasca never is (be it with his friends or alone). Further, Colombia wasn’t the only country where a few pioneering Westerners “discovered” ayahuasca: it was also happening around the same time in Peru, Ecuador and Brazil.

Granted, indigenous coca is a venerable tradition in the southern Andean nations and is found in the Sierra Nevada and Cauca as well as the Amazon. Nevertheless, its preparations are different there and its uses, less hospitable: the Kogis, for example, do not like to share it with outsiders, whereas in the Amazon, it is often the equivalent of a cup of coffee offered to anyone who visits a maloca and may simply wish to engage in a serious conversation with his hosts without participating in a full-blown mambeadero, the nightly colloquium inspired by the substance.

And, to start with, about the only easy point of contact with it in the Amazon was Leticia, and especially, the campus of the Universidad Nacional. On the one hand, Leticia was – and still is – the most accessible part of the Amazon for city-dwellers with daily flights from Bogotá and riverboats linking it with Iquitos and Manaus; and on the other, the university which specializes in studies of societies and natural life of the Amazon was the de facto social club of indigenous persons from all over the region; students, informants, activists, and – the often displaced – members of the ethnically mixed and fast-growing native settlements on the outskirts of the city.

In the late 90’s, I entered a true academic community similar, in a way, to what the ancient universities of Europe must have been like centuries ago, at least in the sense that everyone knew each other, the atmosphere was informal and outsiders, welcome to the point where I crashed in the office of a professor I knew from Bogotá, and had access to the communal kitchen, library and lectures. I remember how astonished I was when I met the rector, and instead of an unapproachable tin god like the heads of universities in the States, found him warm and cordial. The same was true of the faculty’s treatment of their students and relationship between the two races, based on a mutual recognition of the value of indigenous wisdom and the sacred nature of coca, a plant whose benefits are proportional to your respect for it.

My maestro was the person who succeeded me on the floor of the same office, the Huitoto elder Oscár Román, the informant of my friend, who was taping more than 100 hours of his encyclopedic knowledge of the plants, myths and customs of his tribe, entirely oral but complemented by a wide reading of scientific manuals on botany, which had begun, decades before, when he was the guide for no less than the legendary Richard Evans Schultes.

When the two were not busy with that, the office was the mambeadero of the university, open to anyone who wanted a master class in mambe and ambil, practice and theory alike. With a packet of Pielroja on the desk alongside his Chocolisto canister of mambe and film canister of ambil (and a bottle of aguardiente beneath), Oscar’s approach to teaching was somewhat eccentric, but he was always in earnest. We learned that mambe is governed by a strict set of norms, starting with the way plants are grown, harvested and prepared. Then, a correct behavior in a ritual that includes a silent concentration on the inner voice as it awakens, letting each person speak in turn, without interruption and an attention to its totemic mirrors in plants, animals, the landscape, the real and mythical history of the tribe and so forth. When that is grasped, however feebly, you enter a strange realm of associative and non- sequential thinking where you see connections between all sorts of unlikely things: a tree and your cold, a flat tire and a quarrel with your parents.

It isn’t so much that your guide heals you of such troubles as that he helps you to dislodge your habitual thought, touch the unconscious or supra-conscious roots of your problems and ultimately, heal yourself, if health is your concern. If not, it serves to sharpen your senses, make your work more energetic or unleash hidden sources of inspiration for whatever your art is. So long as there is a right use of the “high.”

The world being what it is, however, it wasn’t long before a worm crawled into the apple. As the only jungle outpost of a national university, Leticia legitimately provided students of biology and the like from Bogotá with the opportunity to undertake field trips. Now, if I say that the ambit of its seat in Bogotá was rather druggy, I don’t mean to insult one of the highest-ranked universities in Latin America, nor deny the seriousness of most of its students, then as now, nor expect students with an urban mindset to assimilate indigenous values in a few weeks.
For some of them, in any case, mambe was no more than a novel, cheap and (in sufficient doses) intoxicating stone. And each who misconstrued it conveyed that discovery to a dozen friends in Bogotá, and as one group followed another over the years, the number multiplied.

As with ayahuasca, however, some of its indigenous practitioners were also at fault, victims (it must be said) of a hostile environment, where White colonizers now own most of the land, there are few opportunities of employment and the modern world is eroding their identity. Suddenly, in their cash-poor economy, coca became a commodity they could sell and not just to the uninachunos*, but the increasing number of foreign backpackers “doing the Amazon.”

Having already seen it happen with ayahuasca in Iquitos, where those cigar-store Indians are hawking it to unwary tourists – I could predict what it would happen with mambe, and remember the exact moment when that occurred to me. It was at the thatched rancho of a transplanted hippy from Bogotá who occasionally worked as a jungle guide and hosted a rumba for some European clients and students from the university that featured aguardiente and marijuana (as usual) plus mambe, debasing the latter to an auxiliary “high.”

Fast forward to the present: moto-taxi drivers who tout the stuff to the newly arrived; the theft of coca plants from another’s chagra by the same desperate and acculturated indigenas; the wholesale suction of the mambe from Leticia into Bogotá, which inflates its local price to the point where many of those who respect it (already the victims of theft or exhausted soils) can no longer use it; and in Bogotá, the center of our argument, an abundant sale of inferior mambe to Blancos who don’t know the difference – or even if they do – have no idea of how to take a spiritual advantage of the plant. (To be continued).

*Urban worshippers of Pachamama, the Incaic Earth Mother
*Students of the Universidad Nacional 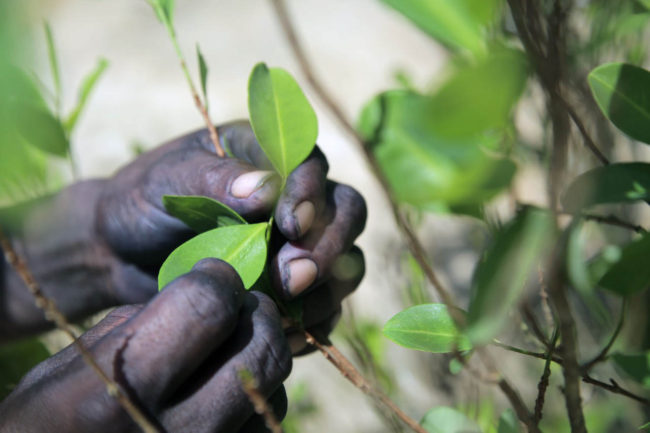 In defense of trees