It all seemed peaceful enough despite emotions running high over the return of the bullfighting season to Bogotá’s Santamaria ring after a five-year absence. Various animal rights groups lined the Carrera Séptima between the National Museum and the Planetarium holding banners and chanting “No more Olé!”. By midday some 2,000 protestors congregated near the steps leading to the red brick stadium built in 1931 and one of the Colombian capital’s most emblematic landmarks.

After bullfighting was banned by former left-wing mayor Gustavo Petro in 2012, a decision by the country’s Constitutional Court decreed June 2016 that the spectacle must return to its traditional home and that the city’s bullfighting corporation  – Corporación Taurina de Bogotá – must be compensated after incurring in huge losses and damages over’s Petro abrupt closure.

And even though current mayor Enrique Peñalosa has personally regretted the high court’s decision, he was mandated by lawmakers last year to embark on a renovation of the ring after 5-years of disuse.

As civic groups and the anti-bullfighting movement assembled Sunday near the stadium, the first spectators were escorted through metal barricades to keep the peaceful protest beyond a several block perimeter and heavily guarded by 1,200 members of the National Police and city’s anti-riot squad – Esmad.

“This culture of attending a fight doesn’t represent us,” claims Natalia Parra, one of the organizers of Sunday’s protest and director of the animal rights group Plataforma ALTO. “This is a Colombia that yearns for a past, a past of bloodshed.”

One of the thousands who turned out in support of the anti-bullfighting movement was Andrés Cardenas and friend Luisa Montoya. Standing under an umbrella to shield themselves from a bright midday sun, the Bogotanos reflected on the “double morality” of their country. “One thing is what the majority of the public wants and the other is what our lawmakers decide,” said Andrés. “Eventually this cruelty has to end if enough people come out to protest,” voiced Luisa.

For Parra, the return of the bulls to the stadium represents the idiosyncrasy of a polarized country that as recently as December signed a peace accord with the oldest guerrilla insurgency in the world, the Revolutionary Armed Forces of Colombia (FARC), to end a half century of violence, yet rubber stamped the bloodletting of another species. “It’s the legalization of violence, once again” said Parra. “It’s a way of transferring the conflict to nature and our animals.”

And in keeping with the court’s sentence, officials from the mayoralty were out in full force offering added security to those wanting to attend Sunday’s event, and the first of five to be held in the capital during this so-called Temporada Taurina.

Bullfights are held in three other cities across Colombia – Medellín, Cali and Manizales – during the first two months of the year.

As the protest spilled into nearby Independence Park and blocked the Transmilenio bus route at the San Diego intersection with Calle 26, spectators who were spotted entering the “security zone” were heckled with chants of “Assassins! Assassins!”

Riot police fired several rounds of smoke cartridges to quell an angry mob after several anti-taurinos physically accosted representatives of the bullfighting corporation, tearing off their hats and hitting them with water bottles. Some 4,000 attended the first fight of the year.

The protest lasted until 7 pm as the last spectators left the stadium, resulting in 3 police injured and several dozen treated by paramedics for bruises and smoke inhalation. The National Police arrested 18 for vandalism.

Anti-bullfighting groups say they will gather every Sunday of a corrida near the Plaza Santamaria to voice their outrage over the court ruling. “As a society we seem to have evolved,” claims Parra. “But our politicians have obviously not.” 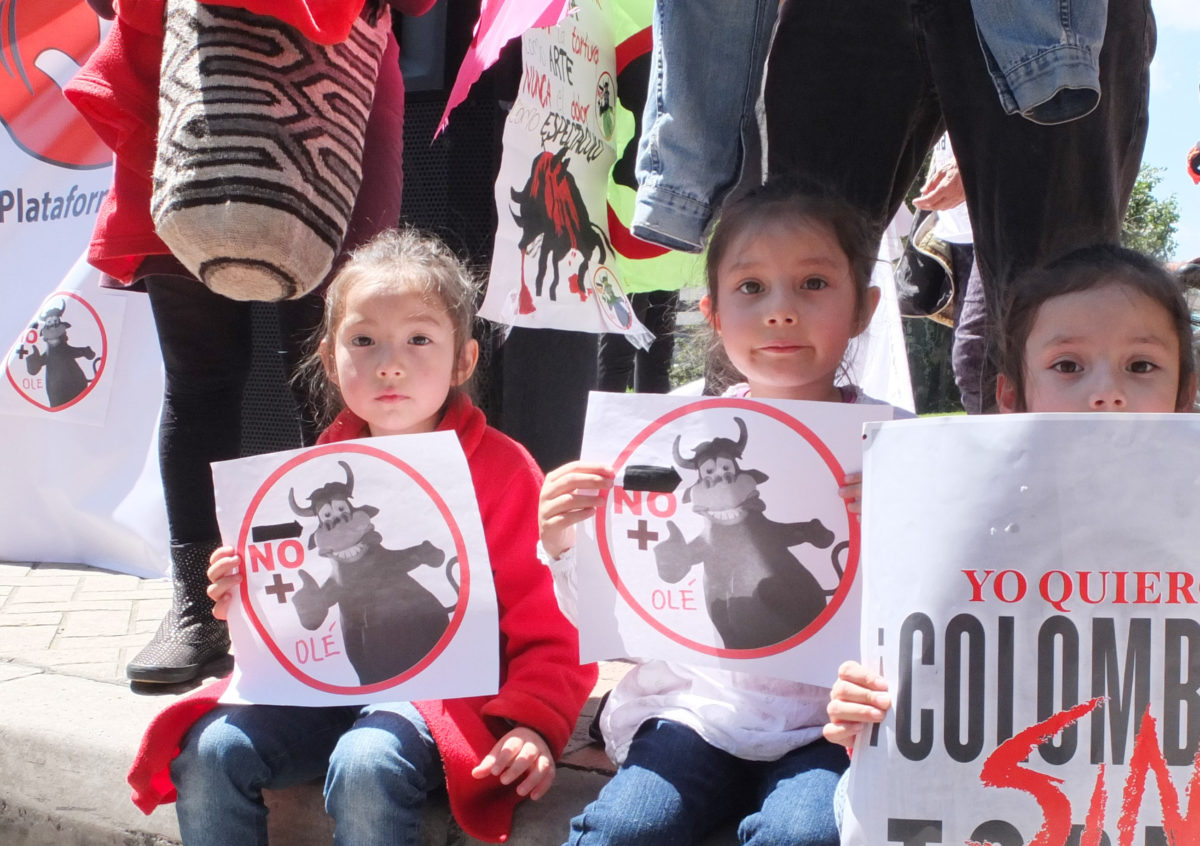